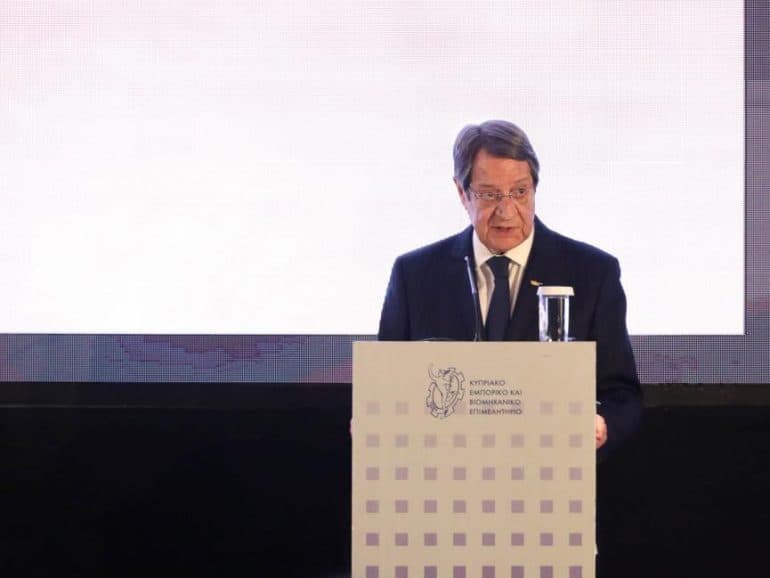 We will deliver an economy built on solid foundations and a state apparatus ready to respond to any unforeseen crises, said the President of the Republic, Nikos Anastasiadis, in his speech at the 95th Annual General Assembly of the Cyprus Chamber of Commerce and Industry.

Referring to the new crisis that arose after the Russian invasion of Ukraine, combined with the health crisis that preceded it and the inflationary trends and energy effects that are created, President Anastasiades said "I want you to feel safe" as it is a crisis "that we are dealing with" , just like the previous ones, with the same seriousness and responsibility", while he noted that the next President will follow the same seriousness and responsibility.

The diversification of the adopted development model will be of decisive importance in terms of the management of the current crisis, as it focused specifically on the utilization of important sectors for the development of the economy, university education, shipping, tourism, high technology, research and innovation and renewable energy sources, said the President, adding that the implementation of reforms and innovative approaches for the operation of the state and its structures was equally targeted.

"I feel really proud, as as a result of the above, we are handing over to the incoming President of the Republic very different data than what we had before us when we took power," he said, noting that he is handing over a healthy and robust economy, despite the three crises. He added that these are confirmed by international Rating Houses, European institutions and recorded relevant statistics.

The President underlined the positive course of the economy, with the growth rate predicted to reach 6% for 2022, "which demonstrates the resilience, but also the prospects of the economy", as he said. In addition, he noted the return to surpluses after the deficit years of the pandemic that preceded it, stating that for 2023 a surplus of €460 million is forecast, which corresponds to 1,7% of GDP.

In addition, he highlighted the decline of public debt to 89,3% this year and predicted a further decrease to 83,3% in 2023. As for unemployment, the President noted that it has decreased to 7%, while a further decrease in the rate is predicted in 2023 to 6,4%, to reach 2025% in 5, i.e. in conditions of full employment.

Furthermore, the President highlighted the continuous upgrading of the long-term and short-term creditworthiness of Cyprus by the international Rating Houses. "Just yesterday a new report was announced. It is confirmed once again, together with the rest of the Evaluation Houses, the reliability, the creditworthiness of the Cypriot economy and the right path" of fiscal policy, he noted.

During the pandemic, a series of measures amounting to €3,2 billion were taken to support workers, businesses and vulnerable groups, he added.

For 2023, the President reported that, due to conscious fiscal policy, an increased budget of €520 million was submitted compared to 2022, with increased development spending by 12%.

Cyprus as a sustainable, business, commercial center of the Mediterranean

President Anastasiades placed special emphasis on policies to transform Cyprus into a sustainable business and commercial center of the Mediterranean. He referred to the package of attractive tax and other incentives, which is reinforced by the new national strategy for attracting businesses to operate or expand business activities in Cyprus.

He noted that already, as a result of the implementation of this strategy, Cyprus from 68th position is now 18th in the Greenfield FDI Performance Index, which records the performance of countries in attracting foreign investment, marking the largest increase of all countries .

He added that the plan's investments and reforms envisage strengthening the primary and secondary sectors of the economy and therefore expanding the production base, improving competitiveness and the business environment, through digital transformation, speeding up licensing procedures and providing incentives, aiming to support start-ups and innovative units and to diversify and further promote the tourism product.

"I am really proud, because despite the multiple challenges we have faced, in two months we will deliver an economy built on solid foundations and a state apparatus ready to respond to any unforeseen crises," concluded the President.

For the KEBE, the President said that its 95-year journey is one full of achievements and contribution, which was inextricably linked to the social and economic development of the country, since the KEBE proved to be a valuable and reliable supporter of the State. Referring to the contribution of the KEBE to the reactivation of industry and business after the Turkish invasion of 1974, to the successful recovery from the economic crisis, as well as the management of the coronavirus pandemic, President Anastasiades thanked the KEBE for the cooperation during the of his tenure.