Tatar: Israel and Egypt gas will pass through the occupied territories

The Turkish Cypriot leader said that "it would be better for this energy route to pass through the Cape of Karpasia, as it will bring new investments there" 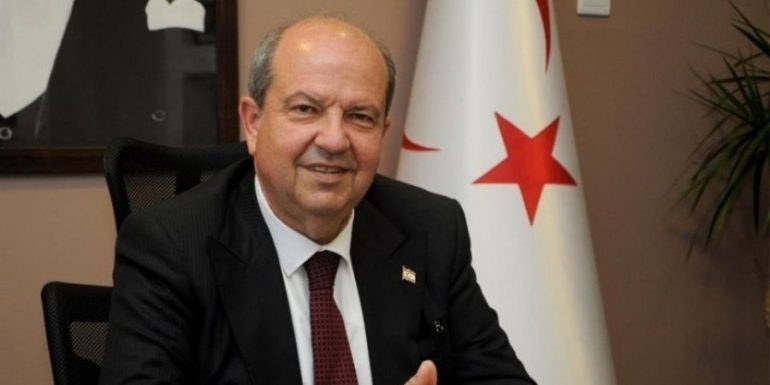 "In the event that the gas comes from Israel or Egypt, the TRNC will definitely be involved because such a pipeline will certainly pass under its maritime jurisdiction," said Ersin Tatar.

In an interview with the Turkish newspaper Milliyet, Ersin Tatar said that the gas of Israel and Egypt, which was on the agenda when Europe was looking for an alternative to Russian gas, "must pass through the maritime jurisdiction of the TDB". and that "this situation will have a positive impact on the regime in northern Cyprus". He argued that the project for the eastern Mediterranean remained completely on the shelf. "If gas is to be transported to the EU from Israel, Egypt and the region, it is much easier for gas to come from Cyprus. Cyprus is 65 km from Turkey. Such a gas route will inevitably bring us recognition of the status, they are obliged to do so, because they may not recognize it, but the Republic of Turkey recognizes it. "Such a route will certainly pass through the maritime jurisdiction of the TRNC," said Ersin Tatar.

The Turkish Cypriot leader said that "it would be better for this energy route to pass through the Cape of Karpasia, as it will bring new investments there", adding that "even if it does not pass through Karpasia, the TRNC will definitely be involved in it. the business".

"Even if it passes by the sea, it will pass through the sea jurisdiction of the TRNC. "Allah will be in this business first," said Ersin Tatar.

The case with Russia is different

Referring to Russian Foreign Minister Sergei Lavrov in "tdvk", Ersin Tatar said that Lavrov spoke about Northern Cyprus to explain the issue of Ukraine before the world public opinion. He makes a comparison with the recognition of two separatist regions in Ukraine by Russia, that there is also a TRNC there. She says people have accepted it, they may not recognize it, but there is a truth there. On the other hand, compared to their issue in Ukraine, our position in Cyprus is much stronger ".

Because, he continued, “we, the Turkish people, are the founding partners of the Republic of Cyprus. International agreements also show this. Turkey is also a party to all the discussions from 1955 to 1960, because it has the right because of the Treaty of Lausanne. In other words, our case in relation to Russia is different. In our case, Turkey relies entirely on international law, made a move in Cyprus and intervened. So there are no two similar events. "Our situation is much more legal and healthy."

Regarding the EU sanctions against Russia, the Turkish leader said "when the EU decided to impose sanctions, (the Republic of Cyprus) as a member state, it had to participate in the sanctions. But they play a double game because they have excellent ties with the Russians. But the main power in this region is Turkey. "The good management of this process by Turkey, its attitude and position, bringing the issue to the Diplomatic Forum of Antalya, until mediation, brought great power and prestige to Turkey."

He argued that the reason that there has not yet been an agreement on a solution to the Cyprus problem is because the Greek Cypriots continue to work for the Union of Cyprus with Greece. "So we have to develop a new policy. "Our position for two sovereign states in Cyprus is correct. Only in this way can we balance the scales. Whatever the international community says, we will not leave our state, we will not become a patch in a Greek Cypriot Republic," he said.

Nobody meets him, he says

The T / C leader said that "the policy of the two countries has always been our goal, we are happy in this regard… But it is not easy at all, I am disappointed. A group of countries that defend democracy and human rights meet with Anastasiadis every day. I am also an elected leader of the Turkish Cypriot people, they do not meet with me. This is also an insult to the Turkish Cypriot people. Mevlüt Çavuşoλουlu told Borrell (EU High Representative for Foreign Affairs and Security Policy) to meet with Mr Tatar, but he did not meet with me. He says, if you want to talk to me, you will tell your problem to Anastasiadis and he will tell me. "Such an injustice is happening," said Ersin Tatar.