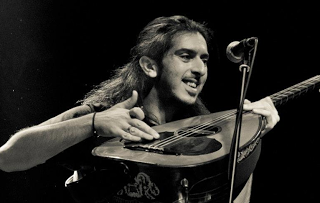 Less than ten years have passed since the release of his first solo album, however, he still retains his identity and remains down to earth in low tones. His visit to Cyprus led us to meet him. He welcomed us with the other members of his orchestra and the interview turned into a pleasant acquaintance and more into a discussion about wind and water for Crete, Cyprus, Alkinoos Ioannidis and Michalis Terlikkas. With his lute in our arms, he then traveled mentally to his home, Lassithi, in Crete, Cyprus, west and east. Read below the interview with Giannis Charoulis:

How many times have you been to Cyprus?
We are essentially closing a year since we started touring in Cyprus and now is the third time we are coming.

What do you think; What similarities do you see it have with Crete?

What you asked me we were discussing today with the children. That is, you walk down the street and greet and talk to people as if we are a big village with famous people.

It is also the peculiarity of language. Crete and Cyprus have a special dialect.
We have noticed this too. We also have many words that are common and are many. How are things these days for you, Giannis? Have you encountered difficulties?
Look, the difficulties, which are real difficulties for me are the health issues only, do not exist. Because you see families that really, as we say, "have no fate in the sun". What can we say about these situations? We can only say that in the midst of this difficulty that opens up to the world the most, we realize that the whole world needs solidarity and help from each other. Now, as far as we are concerned, we are musicians, we turn and sing. This has a lot of luck in it, we are very lucky.

But what has changed? What do you see now that you did not see five years ago?
Look, because change is still in its infancy, that is, whatever mentality is to change will change. Because it is one thing to change out of necessity and another to change optionally, and to say that I do not like it and I want to support it. It makes sense nonetheless, and I think it will shake people's faith, but it will open their eyes more. I think there will be good things in terms of creation and if we talk about art, I believe it will work out well.

I believe the world is back around the highest quality culture.
It returns to the first human needs for this.

How do you see the future? Do you see yourself changing course a bit or will you stay true and authentic as you started?
Truly this landscape is sea and we are boats. We can, perhaps as a crew, do to each other what we should, what we feel beautiful, but beyond that we do not arrange things. Do you vote?
Of course I vote. But I prefer to be a little realistic. And realistic means trying to do what I can with my hands, say, with people close to me. This is realism for me. Now it is difficult to think about how a city can change, but a village is not difficult.

A song you would choose for Cyprus?
It is not one, it is many. There are many stories I have heard especially since I came here. And not only stories but also just seeing things are stories, that is, they speak for themselves. A specially dedicated I do not have to tell you the truth. I just combine images and moments with people I have met, listened to stories and dedicated songs accordingly.

Which of the Cypriot musicians do you single out the most?
Alkinoos Ioannidis for sure. But the day before yesterday, I heard Michalis Terlikkas singing traditional Cypriot in a house and I was impressed because he has a nice stout voice.

Thank you very much Giannis for the wonderful conversation.
I thank you.