The return of the Toyota Avensis 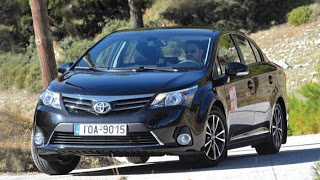 After about nine years of presence in the Cypriot market, the Toyota Avensis is back stronger, improved in points and ready to face the most modern competition in the market.

It's been nine years since Toyota took the next step in the mid-size segment, introducing the new generation Avensis. Since then until today, a lot has changed in the Cypriot car market, including the priorities of buyers, who put consumption above all and place a very high value for money.

The Avensis has always "played" very strongly in these areas, while now, renewed and visually, it is gaining even more interest as a choice in the middle class.

Toyota is famous for its conservative aesthetics that characterizes the original models, but also their facelifts. However, for some time now, that has changed. The GT86 seems to have captivated the entire range, giving it an air of design freshness and dynamism. Avensis benefits from this.

The updated model may not have great changes with the old one, but they are capable of making it stand out. At the front are the new luminaires that are elegant with the daytime running lights giving them a distinctive "eyebrow". The grille of the mask has also been changed, while the new bumper respects what Toyota calls "under priority".

That is, it has a large air intake that emphasizes the bottom of the car. The most aerodynamic mirrors can be seen from the side, while at the rear the lights and the bumper have a fresh design.

Inside the Avensis, the changes are more invisible. Toyota announces that it has put more insulation materials on the cabin floor, but also behind the dashboard, further enhancing the sense of quality you receive inside.

Inside, the single dashboard stands out, which is made of soft touch plastic with an excellent finish, but also the perfect fit of all individual plastic surfaces.

Overall, this is a dark but very comfortable interior, with plenty of space, careful ergonomics and great usability. The driving position is relaxed, with moderate lateral support, while the peripheral visibility is unobstructed.

Another new piece of equipment that meets the Elegant version, is the infotainment system, Toyota Touch, which includes a large touch screen and connection to all external audio and communication sources. It is worth noting that the system is easy to use and works quickly.

From the beginning of his career, Avensis had. Ecological concerns. After all, it was he who launched the implementation of the ecological package to reduce consumption under the heading Optimal Drive.

At its heart is the 1.600-horsepower Valvematic engine, according to which, in addition to the well-known technology of dual variable intake and exhaust valves, a system has been added that constantly changes the intake of the intake valves, for better control of the supply and air speed. The result is more efficient operation with lower consumption. The engine works civilly and economically, while giving a good 0-100 to the car, but moderate prices for reprisals, due to the sparsely scaled 6-speed transmission.

The Avensis, with upgrades to the soundproofing and (according to Toyota) to the sturdiness of the frame, has tried to put the issue of comfort, which has always been its strong point, on a new footing.

Really, even after the renewal, the mid-size Toyota is the ideal ally for long comfortable journeys, while, despite its large dimensions, it proves (proportionally) flexible and comfortable even in the city.

The steering wheel has been re-tuned to provide more immediate information to the driver, something you get, while the brakes have a mediocre feel, but very good performance.

Beyond that, the Avensis unfolds a mature character whenever the driver wants to move smoothly. Turning inclinations are present, but not annoying, while the car in fast driving proves to be safe, but not compatible with any sporty dispositions of the driver. After all, each in its own way.

Toyota is loved by the general public because it remains true to certain values. When you buy an Avensis, currently the renewed one, you know that you are getting (and really getting) a reliable car (according to the findings of TÜV Germany), which is "shielded" by Toyota's 6-year "warranty" The company).

With less than 20.000, you also buy quality construction, top comfort, careful safety, since the 7 airbags belong to the basic equipment of the model, and very good value for money, since the fixed costs of the model are "withheld".

You will redeem the bonus of the upgrade in the appearance, which is more special, but also in the possibility of choosing up to date comfort equipment. So Avensis re-enters the game with claims.