"I became this way because of my ex": The 46-year-old who wants to transform into a vampire bursts out

A woman from Mexico who has... transformed into a "vampire" because of her appearance, is now warning her followers 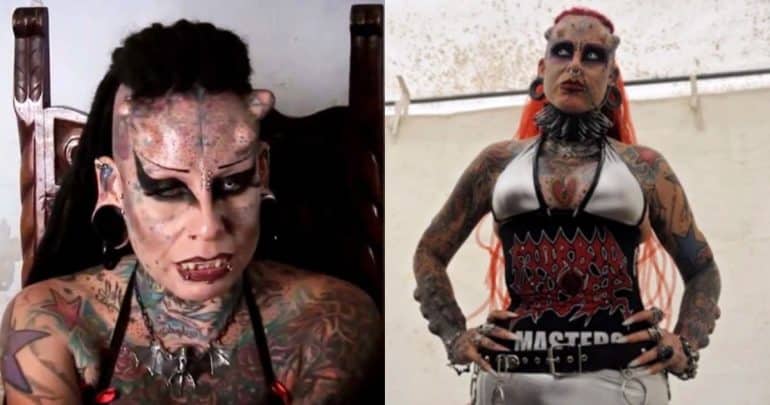 In fact, she states that an incident of domestic violence made her change externally as she believed that her new image it would give her the strength and release she needed.

More specifically, Kristerna has had almost 50 surgeries on her body, which she claims is 99% covered by tattoos. In fact, according to the Guinness World Records, she is the woman with the most tattoos in the world, as she has tattoos even in her eyes.

The incident that changed her

She got her first tattoo when she was 14 and a few years later got her degree in criminal law. She had a normal life, but an incident made her change outwardly. This decision was made when she became a victim of domestic violence by her husband.

After this traumatic incident she decided to modify her body as a sign of strength and liberation. Filled with tattoos, piercings, cut out her tongue, put implants in her head, with the end result reminiscent of a vampire. Hence the nickname "real-life vampire" that now follows her, even though she doesn't like drinking blood. One of the most difficult and painful procedures was the eye tattoos.

Speaking to Guinness World Records, Kristerna stressed that many of the ways people could change their bodies were not reversible and therefore, should not be done to keep up with fashion trends. That is why he emphasized that one should think very seriously before doing something extreme to his body.

“The advice I would give is that you have to think about it a lot as it is irreversible. I like the way I look, but you have to understand that there are young people who are very open to tattoos and piercings and everything. They have become fashionable, but we may reach a point where they are not what we want anymore or we may not like them anymore. Therefore, you have to think about it a lot to love it and be able to defend it throughout your life," he said.

Kristerna added that a body modification might look good now, but it should be considered what it will look like when it reaches an older age. And while she warned people to think carefully before making any extreme and permanent changes to their bodies, she said she would continue with the modifications.