He wanted to impress her: Groom sings to the bride, but ends up in the hospital with a dislocated shoulder

A groom who wanted to impress his wife with a beautiful move at their wedding reception had a bad end. 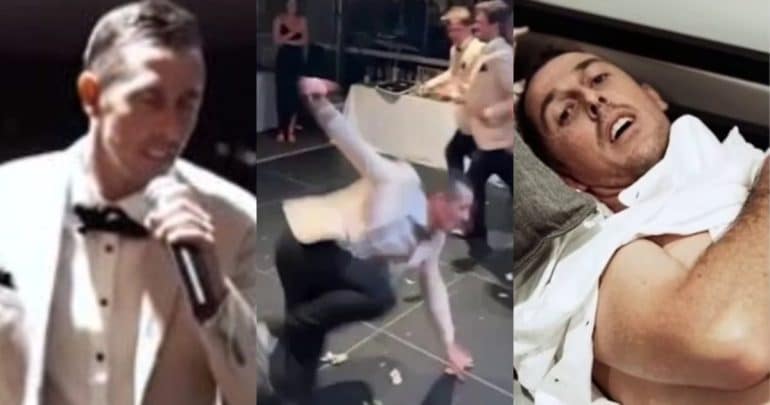 One met a bad end groom who wanted to impress his wife with a beautiful move at their wedding reception.

Ο Adam Quinn decided to surprise his bride Helen in front of friends and family with an unusual song choice. The ambitious groom decided to sing to his wife with metal music. Turns out it wasn't the best idea either...

Pulses rose and minutes later Quinn was on stage hopping around with his friends covered in spilled beer and champagne. The unfortunate groom slipped awkwardly, landed heavily on his hand and he dislocated his elbow, at the same time causing mixed reactions of horror and laughter from the guests.

The couple's videographer, Tom Healy, recorded Quinn's fall before seeing them run away to hospital. The footage also shows paramedics appearing and Quinn using a green morphine whistle for the excruciating pain. "How good is getting married after all?" one is heard joking. Groom and bride entered the ambulance and were rushed to the hospital.

As guests partied late into the night, Quinn had to pass out before doctors could put his elbow back in place. As soon as he recovered he took out a video where he said full of shame “I was singing a classic love song, I thought it was very romantic. I didn't expect this to happen".