An unlucky man who wore a bear costume to surprise his girlfriend and saw her with another man is making the rounds on the internet. 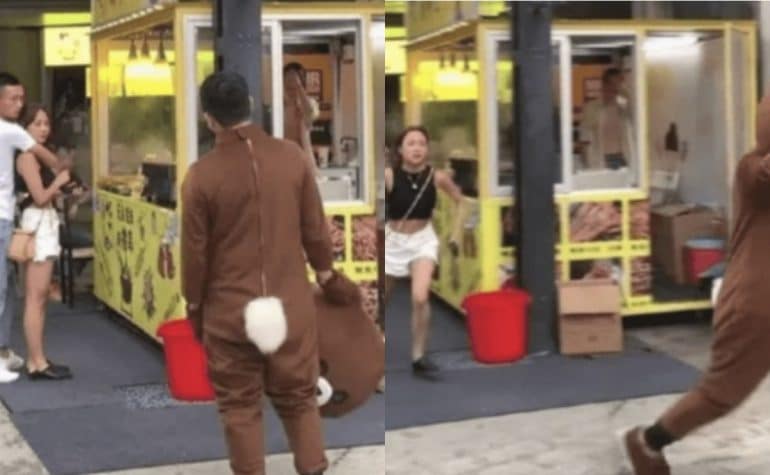 An unlucky man wearing a bear costume is making the rounds on the internet surprise to his girlfriend and saw her with another man.

He decided to wear a teddy bear costume with a giant head for the occasion. The incident went viral on Twitter, after being shared by user @T_Radiosonde, who posted a series of photos of the incident.

A video of the incident shows the man removing the head of the suit, at which point the girl suddenly notices him and leaves the other man's embrace to run after her boyfriend, who leaves in frustration, trying to offer him a hug. Meanwhile, the man put the head suit back on, probably to hide his tears.

Obviously, this being the internet, nothing can be accurately verified. But several Reddit users claim that the man in the uniform returned home after military service and he just wanted to surprise his girlfriend.

A Reddit user, ismokecrayolas, claimed to be a friend of the man wearing the costume, writing: “The guy whose girlfriend cheated on him is a close friend of mine. I took him out for hot drink and beer. She decided to take a break from relationships. We will bring him in." The same friend also claimed that the man in the uniform was making extra money on top of his regular job by taking pictures of people in his uniform downtown.

Watch the video with the unfortunate surprise

The tweet has over 83.000 likes at this point and several comments have been identified with the man in the uniform who went to make a surprise. "Absolutely pathetic, he deserves better", someone commented. Redditor u/Thatguywhokills2 commented on the video, saying: "Imagine having to go back to work after that." Someone else commented: "The way he wears his costume head and hangs down is heartbreaking."