"Greece from ouzo to the junta" 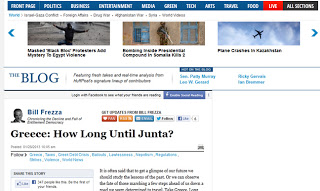 "It is often said that to get a taste of the future you have to look to the past. Or we may observe the fate of those who parade a few steps in front of us, down a road that they seem determined to travel. Take Greece for example ".

With these phrases begins the article by Bill Frezza, a venture capitalist and contributor to big financial publications, in his article in the Huffington Post to ask how far the country is from the junta.

"It has long been characterized as the cradle of democracy," the columnist continues, wondering:

"The unfortunate Greeks have managed to leave the headlines for a few months as they spend the last injection of cash, courtesy of the German taxpayer… Widespread misery and despair give birth to lawlessness and violence. "The feeling that the country is collapsing encourages marginal political parties on both the left and the right," Frezza wrote, urging readers to read reports from the Greek press buried in the back pages of American newspapers, he says, and then. will ask:

"How much longer can these proud people tolerate such misery?"

Frezza then refers to the gloomy social and economic situation in Greece, to characteristic aspects of the economic crisis, such as the rise in the price of oil that has turned Athens into a gas chamber, galloping unemployment and the popular habit of strikes that now, as he points out, it is a "daily phenomenon" emphasizing that many strikers consider it normal to be paid even when they do not show up for work and in the recent terrorist attacks:

"A series of small-scale bombings and arson attacks have shaken Athens," the article reads.

"Study the character of the Greek and you will find many contradictions. On the one hand the caricature of the lazy, tax evader who drinks ouzo with his friends in the tavern, as he is paid for a government post secured by an uncle and from which he is absent. "On the other hand, there is a militant spirit that even Hitler praised." Greek promises of action are worth as much as Penelope's promises to would-be suitors.

"When the anarchists / communists explode and the fascists / nationalists respond, will we see a repeat of the civil war that cost more lives in Greece than World War II? How far are we from the point where frightened and terrified people will support a junta that promises security? "Someone has to restore order when the German money runs out, because it will certainly not be the German soldiers who will be sent to keep the peace," the columnist concludes.