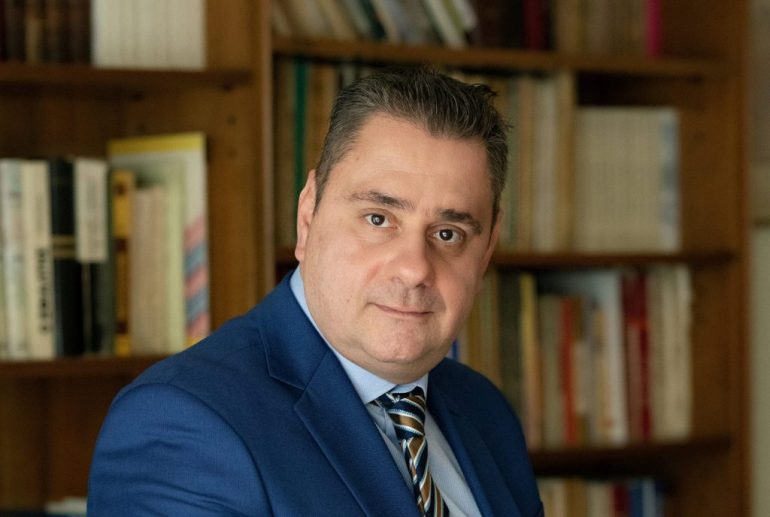 Πandemi happens most η requirement της relentlessςfightς of corruption, entanglement, opacity,unworthiness, factorism, elitism, partisanship, favoritism and nepotism prevailing in our country and first Mr.The task of the Members of Parliament who will occupy the seats in the House of Representatives after the electoral process of May 30, 2021 should be the speedy voting of all the required legislation for the restructuring of the institutions, as ozone These phenomena disintegrate the social fabric, alienate citizens from the commons, completely disappoint our young people, exacerbating the problem "Brain drain" (Brain-drain) abroad, are dragging the Republic of Cyprus internationally and directly endangering its very existence.

On this territory, the direct digitization of all the services of the State is imperative and, above all, the electronic interconnection of the services with each other, as they lead inevitably. in verifying, transparency and restoring the confidence of the state in the eyes of the citizen.

He advocates in this direction and his access to the information by posting on a special internet platform the public contracts, procurement, fees and monetary benefits of the State to third parties, ie suppliers, officials, officials, etc., so that it is knownthe operating expenses of the State.

It is a given that as digitization increases, so does citizen access to information is increasing, decreases the self-contained his contact with the public and the phenomenon of the unjust is drastically reduced ή illegal transactions.

In addition, the need for the establishment and operation of a number of Independent Administrative Authorities with real guarantees of independence and the operation of the State to be done on a more democratic basis, based on decisions of collective bodies and into a marginalization "The principle of a man", as at least the position in the negotiating table of the Cyprus problem is contradictory to be the decentralization of powers within a federation, when at the same time the indivisible State of the Republic of Cyprus operates in a manifestly centralized manner.

Among them is the urgent need to establish an Independent Anti-Corruption Authority, which will be set up following the announcement of an open tender for submission of interest for filling vacancies of the Authority and η σEstablishment of an Independent Selection Committee, which will be composed of independent officials and / or personalities of recognized prestige which will check the formal qualifications of the candidates in relation to the service plan and will compile a list of nominees to the decision-making body.

But a key and groundbreaking innovation of the law could is, beyond her knownς suggestedςsolutionς of Pancyprian Bar Association about dappointment by the Council of Ministers, the implementation of a direct democratic way of electronic voting for the election of the members of the Commission, at the same time as the population size of the Republic of Cyprus allows it and this is an incentive for the modernization of the State, including the Parliament, the Committees and its Plenary Session.

Furthermore, that Authority should has the appropriate functional autonomy, financial self-sufficiency and to staffed by criminals investigators who will exercise at their discretion interrogationacts andwill be able to impose administrative sanctions and when diagnosed with the possibility of committing criminal offenses to refer the suspects to the Attorney General for registering a case.

At the same time, it is necessary to eliminate the conflicts of competence between the Attorney General, the Auditor General and the Concealment Crime Unit (MO.Κ.Α.Σ.) through the adoption of appropriate legislative initiatives for the adoption of the ex-officio control of the Supreme Court for the judicial diagnosis and delimitation of the competencies of the above bodies.

It is also necessary simplification and the codification of legislation as well as misplaced legislation but also the constant changes in the legal framework increase the chances occurrence of the phenomenon of corruption, because they are identified with delays in the implementation of the law and intensify in the eyesa of the citizen denial and the impunity.

In fact, full harmonization with the requirements of the report can be considered more urgent compliance with the fourth evaluation cycle of the Group of States against Corruption of the Council of Europe (known as the ‘report Greco») To prevent corruption of Members of Parliament, Judges and Prosecutors, regarding τirreconcilable but also against the conflict of interests that may arise during the parliamentary work process or later, such as a promise or provision gifts and other benefits, third party contracts, ancillary activities or post-employment situations as well as the phenomenon of "Revolving doors".

As a consequence of the above, the provision for protection of witnesses in the public interest complaining of corruption crimes (whistleblowers) and the activation of an anonymous complaint line for such crimes.

The need to protect the undermining of democracy from political connections is also evident (lobbying), while the timely and periodic submission of Members' asset declarations (known as the "where did you come from" statement), of effective control, is of paramount importance? by supervisors and more specifically certified public accountants and the State Audit Office.

Catalytic however of importance is the inclusion in the statement all the assets of the MPs themselves but also of the spouses and dependent members of his familyς and in particular the establishment of a monitoring mechanismin an in-depth evaluation -long-term I add in the opinion of the writer- and towards the establishment of an independent and effective mechanism for such monitoring.

In short, those who manage public money in any way should be thoroughly and thoroughly audited, especially the Members of Parliament, who as representatives of the legislature should be its outspoken preachers. clarity, of transparency, meritocracy and the defense of the public interest.

So the property should be controlled situation of the representatives of K.October, both at the time of their election and accession to Parliament and periodically, but more so at the time of any loss of parliamentary capacity, in order to determine whether or not there is any illegal or unjust enrichment.

Finally, as a Candidate for Member of Parliament for Famagusta I feel the need to state that the purpose of the existence of the "Solidarity" movement but also My personal concern with the public is the coexistence with the healthy forces of the place in the dismantling of the old party perceptions based on the predominance of the individual interest to the detriment of the collective and overriding public interest, the suppression of the russet "Oriental type", the consequent growth of those who dynamically constitute the social phenomenon of socio-economic corruption, decay, their tacit acceptance by citizens, the consolidation of the belief that "Everyone is the same" and finally distancing oneself from socio-political events.

On May 30, we also have parliamentary elections on the issue of corruption and entanglement we only need to remember the following: "Holders must simply to be judged judges, after ψif tof Justice is the publication and the quintessence of Democracy is accountability».