We recommend the award-winning Bartender Panagiotis Anglogallou from Xylofagou! (PICTURES)

Panagiotis introduces us to the award-winning cocktail and makes the most beautiful answer cocktail for FamagustaNews. 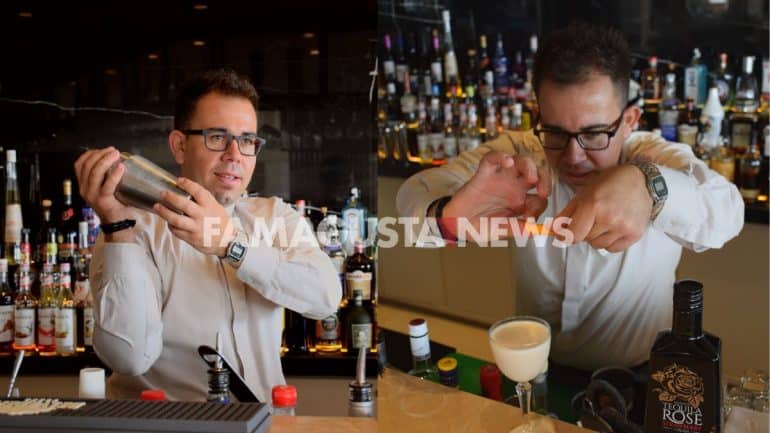 29time Panagiotis Anglogallou from Xylofagou, won 1st place in the Pancyprian Barteding competition and will represent our island at the World Cup in Cuba in November.

But we met Panagiotis and met him through a well-known lounge bar in Ayia Napa, where he works. We were won over by his humor, his concentration and his passion for creating cocktails.

With knowledge but also talent, he prepares refined drinks and drives even the most demanding palate crazy.

Enjoy the most beautiful cocktail of answers made by Panagiotis Anglogallou for FamagustaNews and Andri Flourentzou!

Panagiotis had the bartending in him as it was seen from his course and emerged at the right time. The occasion was his father, who worked in a hotel. In 2011 Panagiotis started working as a bartender. Then little by little he started looking for it more and so the seminars came and in the process the certification of profession by ANAD. He also attended Bartending School Level 1 by Kostas Pisias and of course he does not intend to stop here! 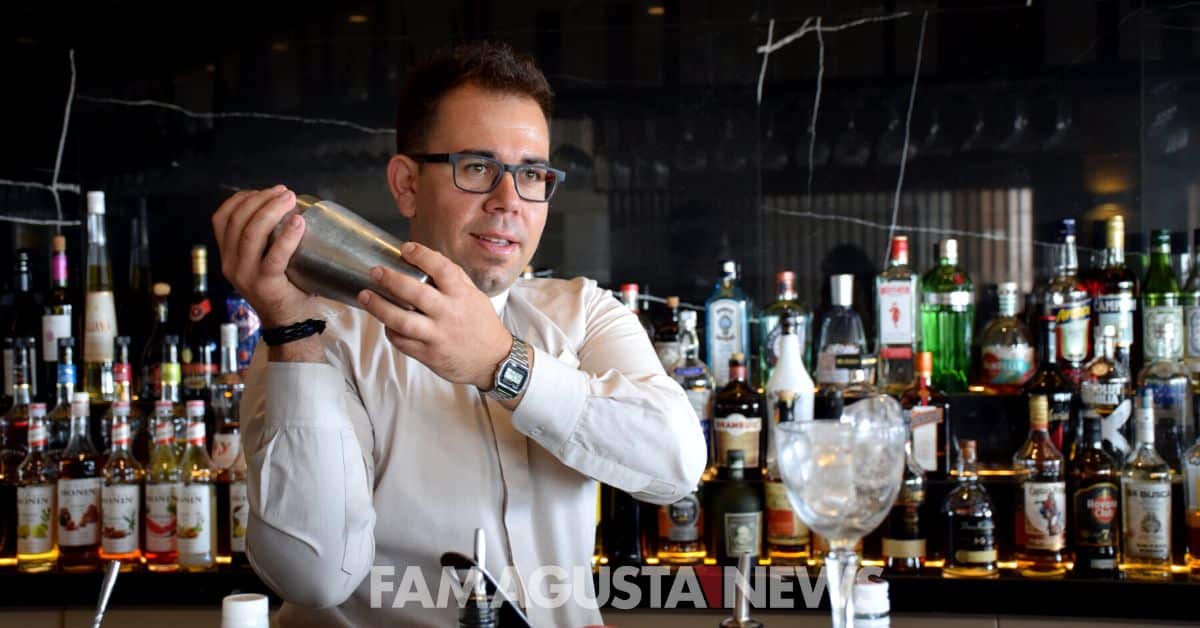 Talking to Panagiotis and asking him about his favorite drink, he answers with humor that it is coca cola! We immediately understand that what led Panagiotis to bartending was not the love for alcohol but the passion to create.

"I realized that bartending is an art form that gives the artist the freedom to create delicious masterpieces."

If he had to make a cocktail for his personality he could easily tell us that it would be the best, with the humor he has. But although it is easy to distinguish such characteristics in the personality of Panagiotis, he claims that he is unexplored.

The cocktail of his personality would be "A cocktail whose ingredients can not be easily detected. An alcoholic beverage that you do not expect, such as vodka would be the basis for this cocktail. "

Panagiotis took advantage of the quarantine so that he could practice his passion which is none other than bartending. So he built his own "bar" with unused wood (pallet) and branches, which he took from the sea.

Many people from this bar have tried Panagiotis' "experiments", from the biggest to the smallest, who was the one who approved a cocktail that will go to a competition!

"The drink he asked me to drink and 2nd, I will take it to a competition"

However, the cocktail that everyone wants to taste when they pass through the threshold of Panagiotis is the one that won the competition. 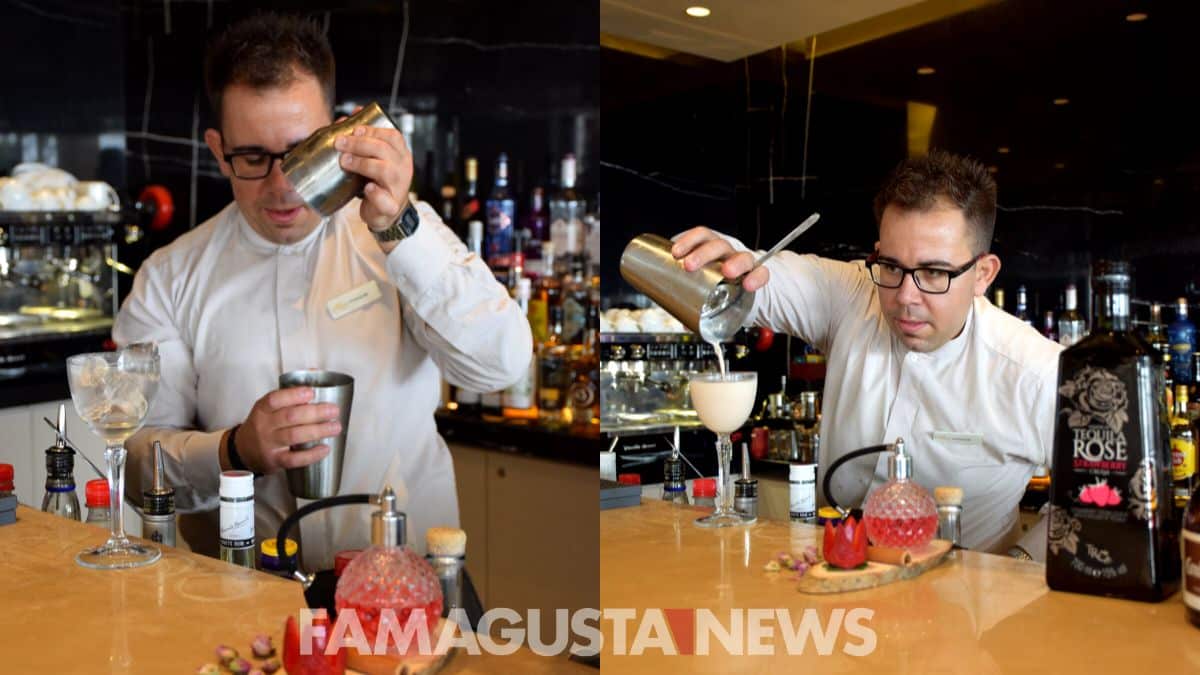 A cocktail out of the box! 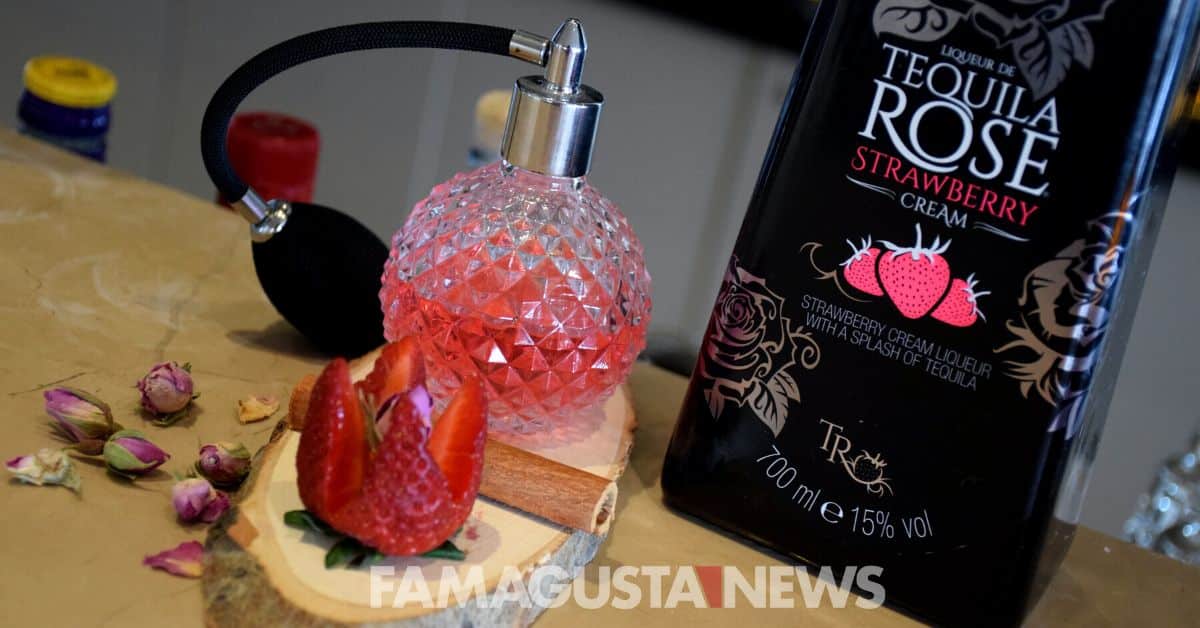 You spray with rose water and you are ready! 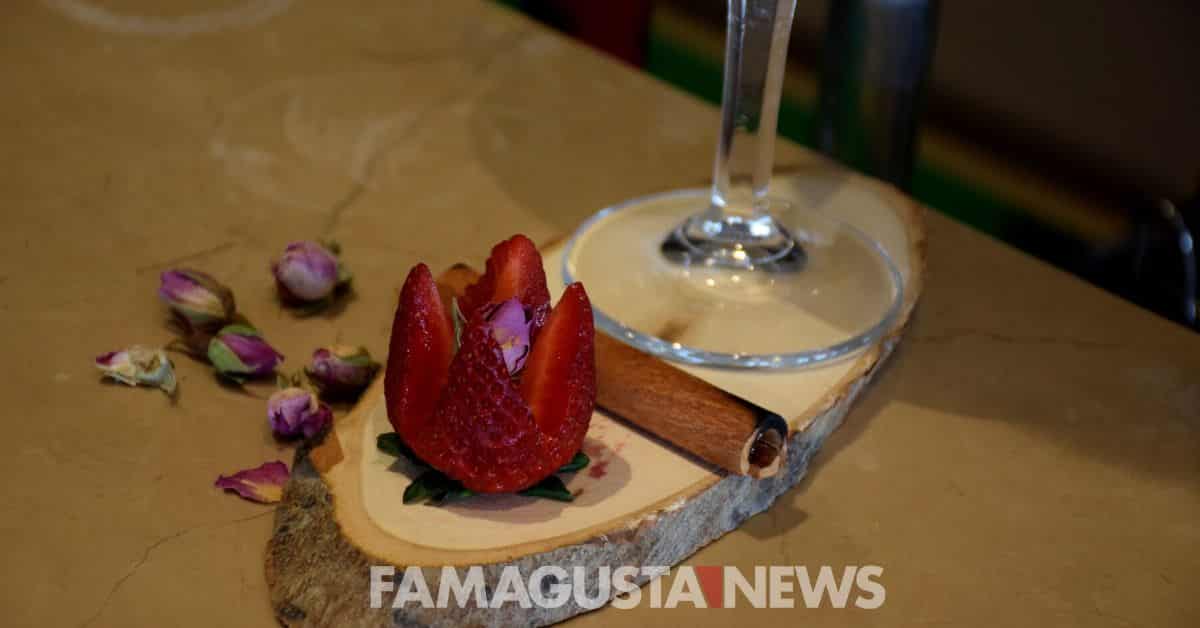 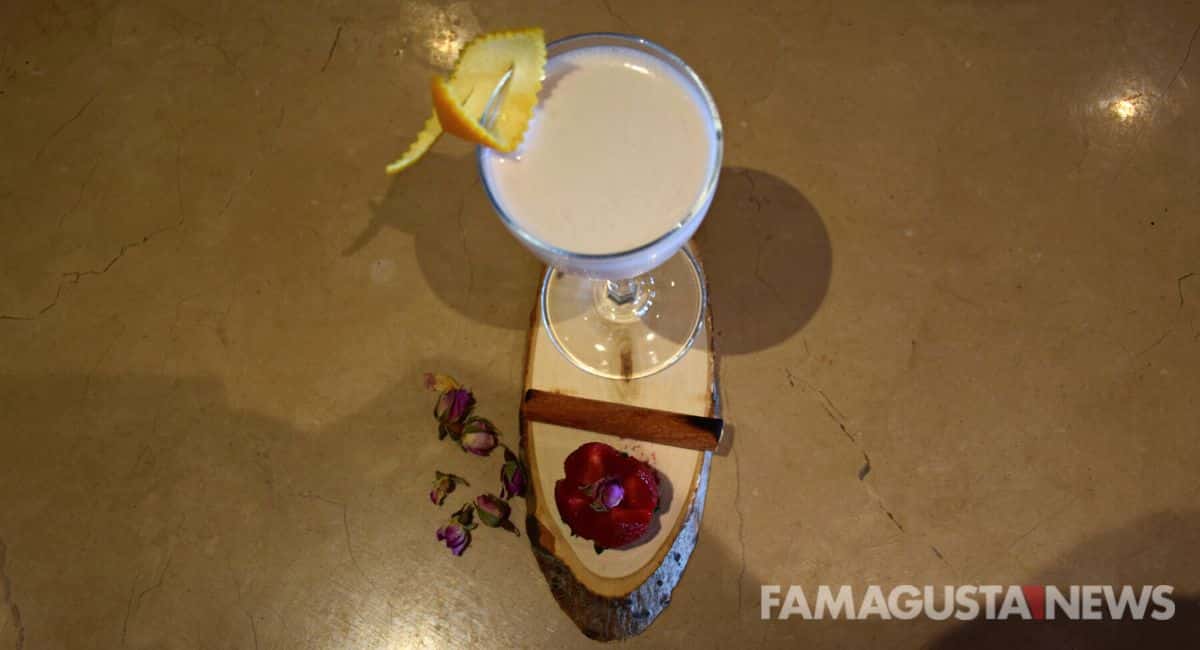 Panagiotis told us about his experience in the competition.

"I think it is worth mentioning that it was the 3rd time I took part. I was quite disappointed the first few times but with the support of the Bartending Association and my stubbornness, I fought it to get even in the 5th group.

The first place was for me and for those around me a big and pleasant surprise!

One criterion for winning the competition is to know not only how to make cocktails and know techniques but also to be able to organize events, to coordinate the events and know how to work in events. Very important factors for the jury is the atmosphere that exists at the event, if the customers stay long enough in the event and of course if they buy a second of the cocktail made by the contestant or just drink one, and then change the drink.

I worked hard on the drink I made, a lot of thought to create something out of the ordinary and a lot of tests to achieve it! The result left me satisfied and as everything shows, many of those who try it. " 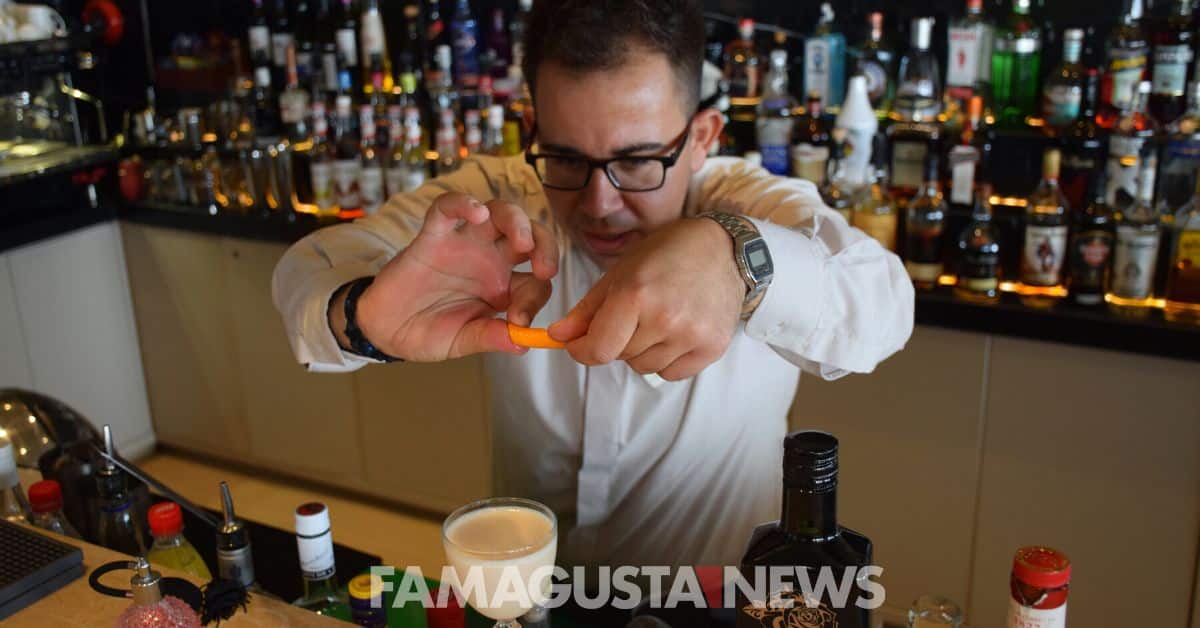 The competition gives him a great opportunity to participate in seminars abroad but also to take part in World bartending competitions.

"It does not matter the prize but the responsibility I won to represent Cyprus at the World Cup in Cuba in November 2022. Cuba will be attended by 60 countries, a number that is a challenge for me and of course I look forward to giving my best and participating in the seminars. to be offered. "My goal is not the medal - if it comes naturally and I will be happy - but to win many things professionally and to surpass myself."

The Kokkinochoriates probably hold the first place in… chemistry according to what Panagiotis says!

"That bartending in Cyprus I consider to be at a good level. That is, if I had to score from one to ten I would put a seven. The Province of Famagusta has probably the most because of the Bartending Association which is based here and therefore very good professionals. However, I would be unfair if I did not mention the other provinces where I have identified some quite good ones according to my own criteria. " 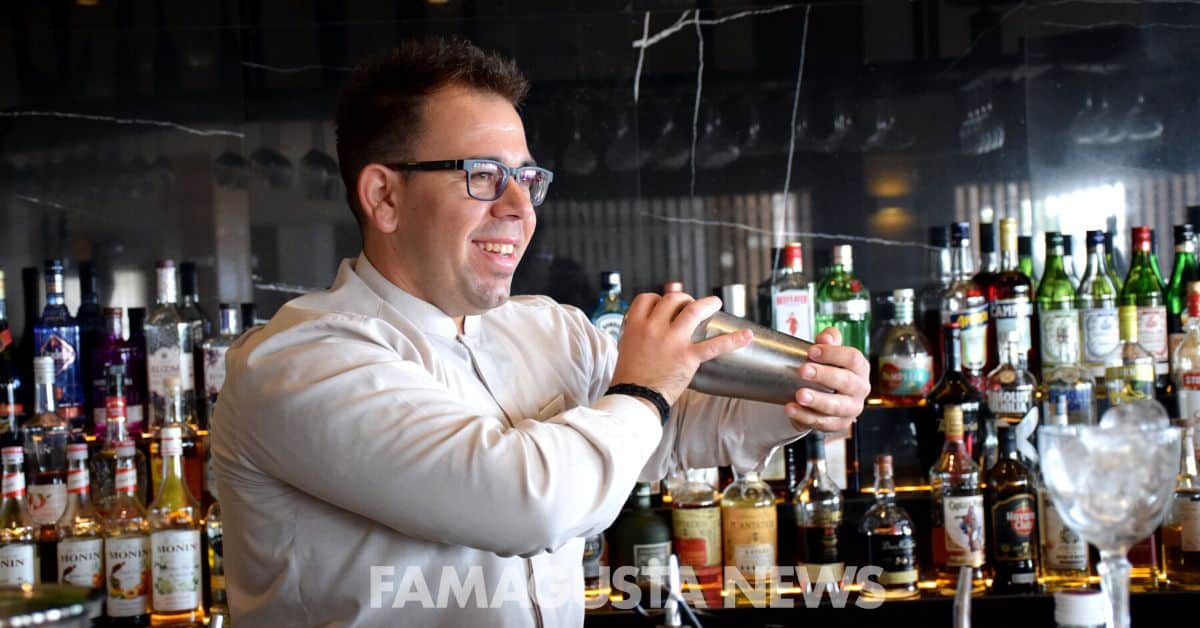 And for better or worse the profession gives another charm to a man, gives him another air. But is it the same for everyone? Panagiotis was not like that anyway…

"My position behind the bar has changed a lot. Before I got behind the bar I was a very closed character. I was very ashamed. I was shaking the shaker and I was ashamed because of the noise he makes. I thought everyone was looking at me and I felt weird. I was like that. Then I got used to it. I feel more comfortable in the bar, talking to everyone and everyone, something like public relations! I now like contact with people.

The female is no exception but I do not use my title to flirt. I am helpful with every customer. Maybe in women's cocktails I put more art and try to get closer to the flavors that women like, with a step back to the flavors that we like. Usually women like sweets. "You will not add much alcohol, you will add fruit to give it energy, and you will choose vodka or gin."

Panagiotis's goal for the coming years is to develop professionally to the highest level he can reach. Whatever it is. Whether it is a medal in world competitions, or to open his own shop, or to become an ambassador. He states that he does not know how far he can go but the sure thing is that he will strive for the best!

"Whatever I do, I just want to keep making cocktails, either creating them or making them."

We wish him a good career in whatever he does and good luck in Cuba!