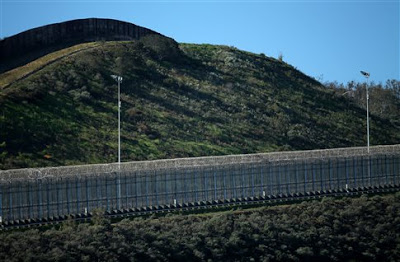 Washington
US President Donald Trump has signed a presidential decree announcing the construction of a wall on the US border with Mexico.

Building the wall was a key promise made by Trump during the election campaign.

In fact, in a television interview with ABC, Trump has stated that Mexico will compensate "100%" the United States for the wall, something that the Mexican government has refused to do. In the same interview, Trump noted that the construction of the wall will begin in the coming months.

"We talked about it from the beginning," he said as he signed the decrees at a ceremony at the interior ministry.

In a statement after the decrees were signed, Trump said he would hold talks with the Mexican president and work with the country to improve the security situation and trade co-operation between the two countries.

He called for the recruitment of 5.000 border guards and the tripling of customs staff. He noted that the construction of the wall will begin immediately. He also announced the creation of an office to "support victims of crime by illegal immigrants".

"The construction of this wall was more than a pre-election promise. "It's the first step of a common sense to really secure our perforated borders," said Sean Spicer, a spokesman for the US presidency. "This will reduce the flow of drugs, crime and illegal immigrants into the United States," he said.

Trump also signed a decree to remove funding from cities he considers "shelters" for unregistered immigrants.

It is worth noting that cities such as San Francisco refuse to cooperate with the federal authorities and take action against immigrants.

"The American people will no longer need to be forced to subsidize this breach of our rules," said a White House spokesman.

The Republican president is also expected to take steps in the coming days to curb immigration by signing executive decrees limiting the number of refugees, as well as banning visas for citizens of several countries in the Middle East and North Africa, with mainly Muslim populations, such as Syria, Sudan, Somalia, Iraq, Iran, Libya and Yemen.

Trump also intends to end the policies of previous administrations, according to which people arrested as illegal immigrants are released until they are heard by a judge.