"In the hands of Tsipras the future of Europe" 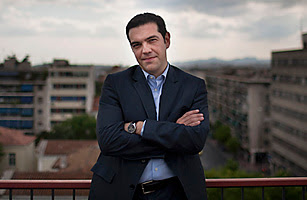 With Alexis Tsipras noting in an interview with TIME that for SYRIZA, Greece's exit from the euro is not an option, the magazine describes the party leader as the man who can hold the future of Europe in his hands…

"A few weeks ago, 37-year-old Alexis Tsipras was a small opposition politician. "Today it is disrupting the European Union as the left-wing SYRIZA party - a party containing from moderate socialists to hardline communists - may be called upon to form a government after the June 17 elections," TIME magazine quoted the SYRIZA president as saying. interview of the leader of SYRIZA.

"Alexis Tsipras has achieved a clever political transformation from a leader of the radical left to a standard-bearer of an anti-memorandum and anti-austerity policy. He can also hold the future of Europe in his hands. "All he has to do is win several seats," says author Joanna Kakissis.

In his interview, the president of SYRIZA states that "structural reforms are needed in the Greek economy but also the restoration of the citizen's trust".

"But without the contribution of the citizens, they do not happen. The changes will be made in high incomes as well "and he emphasizes that" some changes need time and some can be done quickly, such as the asset register ".

"Anyone who makes a false tax return should be punished by confiscating part of their property," he notes elsewhere. "When we have a patient we give him a drug that makes him worse, it does not make sense to keep giving him," he said.

To the question whether the exit from the euro is a possible choice for SYRIZA, he answers that “no, the exit of Greece from the euro is not our choice.
This would have a direct negative impact on low incomes. We believe in a Europe of solidarity. "Europe is not saving us by giving us new loans to repay the previous ones, it is holding us hostage to a catastrophic policy", he notes.

"Mrs Merkel has a great deal of responsibility for the recession in which the Eurozone and the euro find themselves. He insists on a dead end policy. "We must learn from the mistakes of the past, such as in 1930, when we were led into World War II," he said, referring to the differences between European politics at the time and Roosevelt's policies pursued by the United States.

"We want the Europeans to accept a fair plan for Greece, today a large part of the people have lost their dignity", he stressed and characterized the markets with "herds of wild animals driven by their instincts and should not devour politics".

He also stressed that if Europe adheres to a tough stance and wants to get Greece out of the euro, this would lead to dominoes in other countries as well, as speculators' markets have no limits.