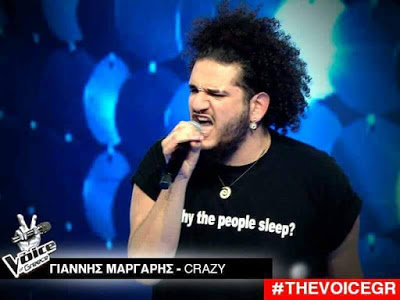 He has stood out from the first moment he set foot on the stage of The Voice with his impressive voice and unique style. People have loved him and show him in every live, giving him a ticket for the grand final. The reason, of course, for the 21-year-old Giannis Margaris from Avgorou who has stolen the impressions in the Greek video game.

It is unbelievable that Giannis until the age of 16 had not uttered a note from his mouth since he had never realized that his voice is special. Luckily for him, Panagiotas' girlfriend immediately recognized his talent and persuaded him to attend a conservatory.

Giannis Margaris spoke to SotiraNews about the big final next Thursday, about his great love for the song but also about how he decided to participate in The Voice.

How did you decide to join the game?
So, in the flu. I worked in a t-shirt shop in the summer, sat on my laptop, saw the application and just did it.

When you applied, did you expect to be in the final?
I really wanted to go to the final. But in the end I never believed it. Still to realize it!

Through the game you gained publicity in a short time. Nevertheless, you seem to be humble and low-key. How do you deal with the whole situation?
Publicity is a bubble that deflates. It is intense now. In 4 months from now, however, everything will be as before! I like that people do not hide their love wherever I am. But in general I am a housecat and I do not move much, so I do not experience it to the fullest. I mainly feel it from the messages and the love I get through social media. Do you think that you can become the next voice of Greece?
So far I have come, I think yes, I can! You receive great love from the people of Cyprus and especially from the people of the province of Famagusta. What message would you like to convey to them?
I know that a thank you will sound very little and cheap, but when it is from the heart it is worth a lot! Always be well and I appreciate that they distinguished in me everything I feel! This.

What does music mean to you?
Still to know!

How would you like Giannis Margaris to be in 10 years?
I do not think more than a month! But I can tell you that I would like to travel with my friends to as many countries as we can.