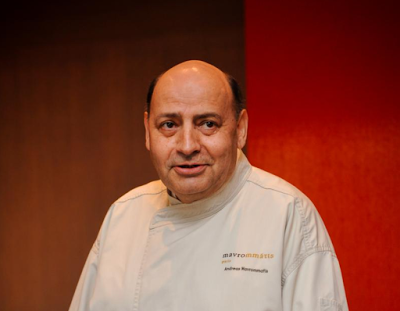 Combining iconic elements of Mediterranean cuisine with the rarest and most sophisticated ingredients, the renowned and world-renowned Chef Andreas Mavrommatis, created new unique experiences of high gastronomic standards, especially for the award-winning Vivaldi restaurant at the Four Seasons Hotel. 
Recently, during a dinner for media representatives, hosted at the completely renovated restaurant Vivaldi by Mavrommatis, the top Chef presented his Mediterranean gastronomic proposals and referred to the philosophy of the new menu.

"It is our duty, he added, to continue to create high quality dishes, with discipline and dedication to our vision."

"Gastronomy, concluded Andreas Mavrommatis, must be treated with respect, as it is an essential product of our culture and highlights our culture."

The media representatives enjoyed the wonderful creations of the new menu, harmoniously combined with wines chosen by the award-winning sommelier of the restaurant Vivaldi by Mavrommatis. Four decades ago, he traveled to the City of Light to study. He opened a small grocery store in the 5th arrondissement of Paris, then a small restaurant and then created an entire… colossus! Andreas Mavrommatis is today considered one of the most distinguished and recognized chefs in France. He stood out because he managed to harmoniously combine the French gastronomic culture with the traditional Greek and Cypriot taste.

If the story of Andreas Mavrommatis became a movie, the first scenes would be shot in Limassol, where he was born and took his first steps. In the late 70s, he went to Paris to study psychology and sociology with his brother, Evagoras.

His relationship with cooking begins when -as a student- he gets a job in a restaurant in the French capital, in order to earn a living. "It was there that I realized that the kitchen plays an important role in human life. "As the French say: we are what we eat," he said earlier.

The Mavrommatis brothers decide in 1981 to open a small grocery store in the 5th arrondissement of Paris. On its shelves, one could find genuine Greek and Cypriot products. "The first store we set up was a bit poor. And yet, people came and went again, because they liked what we offered ".

First they set up a small grocery store, then they added a fridge and a kitchen (which they carried from their house) and slowly the grocery turned into a restaurant…

Meanwhile, Andreas Mavrommatis starts studying gastronomy at the famous Lenotr school, while the "Benjamin" of the family, Dionysis, arrives in France, who immediately enters the business.

The first big bet was to convince the French to give money, to try creative - as Andreas calls it - Greek cuisine. Their fame quickly spread, word of mouth, to every corner of Paris, and the French press began to publish rave reviews. The sequel was easy…

In 1993, they created the first restaurant Le Mavrommatis! "There I wanted to express myself more through the Greek creative cuisine, but adapted to the current gastronomic requirements", said Andreas about the project.

Mavrommatis quickly becomes a hangout for those who love gourmet dishes and Mediterranean cuisine. At his tables one could meet from Greek students, to French politicians, great personalities and stars of international renown.

"Some people called me crazy"

"When I came to Paris to study and decided to suggest Greek flavors to the French, some people called me crazy. I remember friends telling me that it is not possible for our cuisine to stand in a country with such a strong gastronomic tradition ". But as the thirty-five years of successful business have shown, Andreas predicted correctly.

Dishes with tarama or mastic, meatballs, Greek Christmas fish, grilled cuttlefish, beef fillet with olives and red wine sauce and combs with mashed pumpkin and truffle, are just some of the carefully prepared dishes that one can order in της restaurants

The secret of their success

"Good products in the hands of a good cook are a ritual, they are a feast. There are a number of things that even home cooks respect. The chefs continue it, upgrade it and spread it ", he underlined in an interview with Andreas Mavrommatis, explaining that a chef without farmers, stockbreeders and fishermen, can do nothing.

He believes, however, that in Cyprus cooking does not evolve like the French, as he believes that in our country there are not enough quality products: "In Cyprus there is a will, there are serious people, there are no products. There is no stability. One day something may be good and the next it is not. There must be investment and upgrading in agriculture. Otherwise we will constantly bring products from abroad, which will not be completely fresh. "When you do not have good products, you can not make good cuisine."

"You do the cooking, to please the people. In the kitchen you can express yourself, create, imagine. The combinations in cooking are endless! It 's something like works of art. "The only difference is that these works of art are 'destroyed' in three minutes," he said.

The Mavrommati brothers have -today- 3 restaurants in Paris, dozens of food outlets throughout France, a wine cellar and a traditional production workshop in Palaiseau. In addition to restaurants, the company provides catering services at receptions in France, Belgium and Luxembourg. The company has about 100 employees.