Read in detail the instructions of the Police announcement 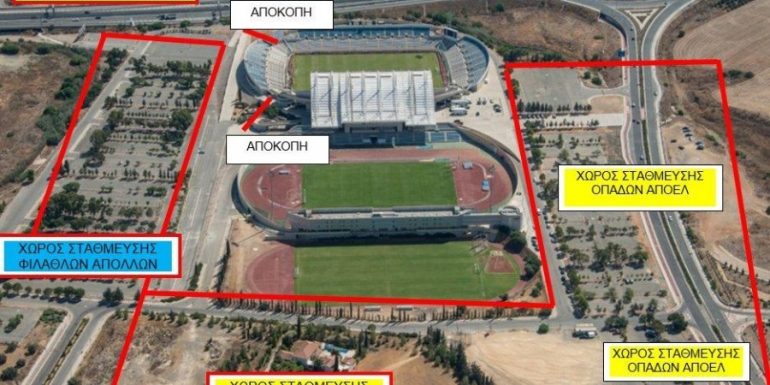 The Cyprus Police issued an announcement regarding the game on Sunday (20/3), between APOEL and Apollon.

"The Police, in the context of its cooperation with the public, invites all the fans who will attend on Sunday 20.03.2022 at 16:00, in the match for the championship between the teams APOEL - APOLLON, to always manifest themselves with sportsmanship and respect for his own team.

Fans who will watch the match are encouraged to arrive at the stadium in time to avoid any inconvenience. The entrances to the stadium will be open to the public at 14:00.

APOEL
APOEL fans will occupy the west, east and south stands of the stadium. They are urged to head to the stadium coming from the roundabout of the highway despite the GSP and to use the south-west parking lots.
The arrival of APOEL fans from the northern parking lot to the western and eastern Kerkides will be prohibited during their arrival and departure.

APOLLO
APOLLO fans will occupy the north stand of the stadium. Encouraging them to head to the stadium coming from the traffic lights of the former ORFANIDIS.

In addition, APOLLO fans are encouraged to use the stadium's north car park, as shown in the attached diagram, as well as the Nuevo Campo futsal car parks.

o It is strictly forbidden to carry flares, crackers and other dangerous objects on the field.

o It is forbidden to carry banners of political, abusive or other provocative content and clothes with political symbols.

o It is forbidden to write slogans in the surrounding area, on the walls of the stadium and anywhere else.

o It is forbidden for fans to enter the stadium, holding shoulder bags and protective helmets of their motorcycles.

o Climbing on the railings of the stadium is prohibited.

o Anyone who does not follow the above rules can be expelled from the stadium without notice and without having any legal requirements against the stadium authorities even if they hold a legal ticket. He may also be arrested and brought before a court.

o Regarding the parking of vehicles on the new roundabout of Latsia and on the sidewalks in the surrounding area of ​​the stadium, it is prohibited and the violators will be reported.

It is pointed out that the Police are in the sports areas for the protection of the fans. It is also clarified that it will be located in the surrounding area of ​​the GSP Stadium to provide traffic facilities to the public both during their arrival and departure ".