Tassoula Hatzitofi, activist and writer, is the new president of the Board of Directors of the historic association, Lyceum of Greek Women of Famagusta 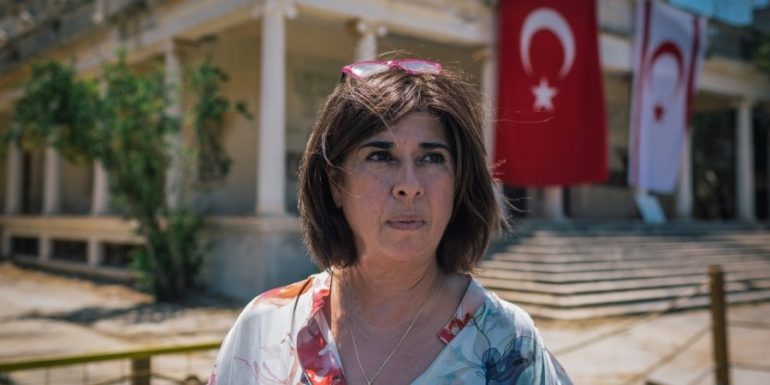 In a statement after her election, Ms. Hatzitofi said:

"First of all, I would like to warmly thank all the people of Famagusta for the great honor they did me, to elect me as the new Chairman of the Board. of the Lyceum of Greek Women of Famagusta, in succession of the late Claire Angelidou.

On the other hand, I would like to warmly thank the members of the previous Board of Directors for their hard work, under adverse conditions, and to assure all the Famagusta women that: With the teamwork of the new Board of Directors and with the support of all Famagusta women and of the members of our branches, we will give new life to a historical association, which wrote brilliant pages of contribution to the cultural and competitive events of Famagusta and Cyprus.

My goal and aspiration is to reactivate all the members, friends, appraisers and collaborators so that the Lyceum of Greek Women of Famagusta and its three branches become a reference point of culture and education inside and outside Cyprus. We will also use the technology to upgrade the offer and the work of the members of the Lyceum. With sympathy, solidarity, teamwork and boundless love for Famagusta, we will promote the Lyceum of Greek Women as the reference and offering association for our occupied city and Cyprus ".

January 30 is a historic and significant date for Famagusta and the Famagusta people. On January 30, 1930, the first women's association in Cyprus, the Lyceum of Greek Women in Famagusta, was officially founded and caused a social, cultural, artistic and educational revolution!

Leading women of the city of Evagoras decided to pave the way for the emancipation, promotion and recognition of the Greek women of the island.

Maria P. Ioannou, a teacher, founded the association according to the model of the Lyceum of Greek Women in Athens, by Kalliroi Paren. The announcement of the founding of the Lyceum was made on January 30, 1930, a day of Greek Letters and the inauguration was performed by the Metropolitan of Kiti, Nikodimos Mylonas.

As expected, the announcement of the establishment of the Lyceum surprised the then conservative Cypriot society and fell like lightning in the air. "Women make a cafe," some commented, because they considered it unacceptable and contrary to the customs of the time. However, they quickly realized that the Lyceum of Greek Women of Famagusta was founded to shake the stagnant waters of a society that viewed with suspicion pioneering actions, especially by women.

In a practice book of the Lyceum, which was accidentally found in the occupied building and was published in 2015, a handwritten note of Maria P. Ioannou is recorded, to the ladies and gentlemen of Famagusta: "A women's association is founded under the name" Lyceum of Greek Women " which is the mental and physical development of its members ".

That is, the development of women, spiritual, artistic, social, national! Her ascension to the sky of Civilization to leave her home, where she was locked up, to raise only her children.

The establishment of the Lyceum is accepted with enthusiasm by the Famagusta women. Misses of the city and young girls were immediately registered as members of the Lyceum, with the first member Marianna Emfietzis, wife of Mayor Georgios Emfietzis, followed by all the noble ladies, along with their daughters.

In the same year, the Conservatory was founded, where all musical instruments were taught. Maria Ioannou, Natalia Arvanitaki and Loula Michailidou taught recitation. He also taught ballet and theater. The Theatrical Club of LEA was also founded in the same year.

One of the most important projects of social contribution of the Lyceum of Greek Women of Famagusta is the Children's Countryside, which was founded in 1932 and hosted until recently thousands of needy children. At first it operated in Kandara, later in Bogazi. The hero of EOKA, Kyriakos Matsis, also offered his services there. He was later transferred to the Ayia Napa Primary School.

In 1964, the construction of the marble mansion of the Lyceum was completed, donated by the couple Maria and Panagiotis Ioannou. It was a building-jewel of Famagusta, where all the national and other events of the city took place. The Gallery was founded in 1971 and then the premises of the Children's Countryside in Ayia Napa were built.

The Lyceum was always present in the national games. In 1940, its members gave their golden engagements to strengthen the warring Greece. In the struggle of EOKA the participation of members of the Lyceum was important. Maria Ioannou, Maritsa Petridou, Claire Angelidou and Eleni Matsi hosted the wanted at home and in every way contributed to the struggle for freedom in Cyprus.

After the coup and the Turkish invasion, the Coordinating Committee of Women's Associations was established and for a month the Lyceum was the feeding center for the uprooted. Members of the Lyceum, the Philoptochos Association, the Philoptochos Brotherhood, the Social Welfare, the Red Cross, took care of the refugees of the first invasion until, on August 14, 1974, the people of Famagusta were persecuted and took the road of refuge.

At the beginning of 1975, during the presidency of Maritsa Petridou and with Secretary Claire Angelidou and vice-president Ioulia Toumazis, 6-8 members of the Lyceum were invited to a hotel in Limassol. A request was made to the Limassol Ladies' Association to allow the Famagusta women to meet at its Children's Home. This is how the Lyceum was rebuilt.

Kika Prastiti accidentally brought a list of members in her bag. Their location began and the Lyceum was resurrected from the ashes stronger. In 1979, a branch was established in Larnaca, in 1988, a branch in Nicosia and in 2007 a branch in Paralimni. The Lyceum of Greek Women of Famagusta became a Member of the International Lyceum, in 1988.

Award of the Academy of Athens

Three conservatories were established in the refugee camp, one in Limassol, one in Larnaca, and one in Paralimni. Both work. In 1987, the Lyceum of Greek Women of Famagusta was awarded by the Academy of Athens for its contribution, especially after the refugee, for the struggle for survival and continuation of its multidimensional work in the midst of many adversities.

The Government of the Republic of Cyprus recognized the importance, value and contribution of the Lyceum of Greek Women of Famagusta. At an event held in September 2017, in honor of the former President of the Lyceum, Claire Angelidou, President Anastasiadis referred to the noble goals of the Lyceum and its important and substantial contribution to all aspects of public life.

"The women of the Lyceum of Greek Women," he said, "far from their headquarters, performed a great work at the forefront of the struggle for the promotion of the Cyprus issue, the liberation of our occupied land and the reunification of our homeland."

Due to the pandemic, the Lyceum has been operating sluggishly for the last two years. The new President of the Lyceum of Greek Women of Famagusta, Tassoula Hatzitofi, was honored by the Lyceum in March 2014, in collaboration with the Cyprus Federation of Women Entrepreneurs (KOGEE).
That event was a "return" home for the honoree as well, classmates, teachers and professors from Famagusta and Limassol, attended to honor her. Addressing Famagusta, with obvious emotion, Tassoula Hatzitofi said:

"No matter how much money I make, no matter how high I reach, no matter how many titles and honors I get, I know that I am a Varosiotou, from 41 Esperidon Street and until my last breath I will fight for the right of every refugee to have a choice to return home ".

He also spoke about the need to be united to achieve our goal. And he is no other, he said, than freedom and returning to our homes.