Tatar: Direct flights from Russia will satisfy both parties

"Direct flights from Russia will satisfy both parties" 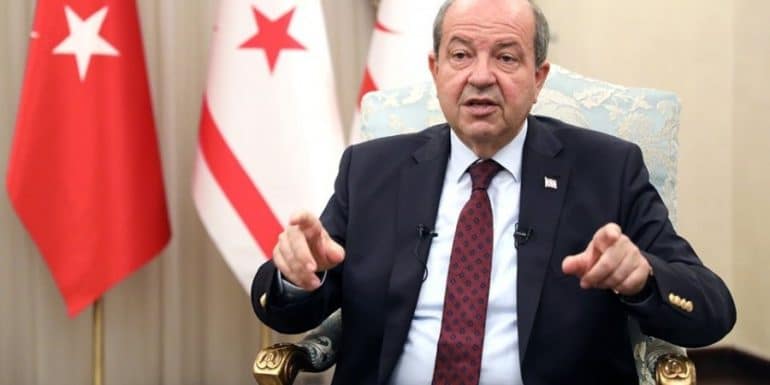 Negotiations on the Cyprus issue can only begin with the confirmation of the equal international status of the Turkish Cypriots, said Ersin Tatar from New York where the 77th UN General Assembly is being held.

Speaking in the illegal "Bayrak", the Turkish Cypriot leader also recalled Turkish President Erdogan's statements that direct flights will bring satisfaction to both parties (pseudo-Russia), as Russia has a large tourism potential and the tourism infrastructure of the pseudo-state is in developed point.

Adding that there are initiatives by private companies on the matter, Tatar said that the flights could be conducted through Turkey, but was unable to say more on the matter.

Stating that Special Envoy Ergun Olgun also met with representatives of various countries, Tatar said that the "historic," as he called it, appeal by Turkish President Recep Tayyip Erdogan to the international community, in the presence of world leaders at the UN General Assembly for the recognition of the pseudo-state set the tone of the meetings in New York.

Commenting on Erdogan's speech, he said it had an impact in many capitals of the world, as well as in New York, and added that they conveyed to the international community the position that formal negotiations on the Cyprus issue can only begin with the confirmation of "equal international status " of the Turkish Cypriots on the basis of sovereign equality. He added that Erdogan put the issue on the agenda in his speech at the UN General Assembly.

Tatar also said that Erdogan pointed out in his speech that the UN should get rid of the contradiction within it. "The UN is an institution that respects important universal concepts and modern regulations, such as the self-determination of every people. The unfair embargo applied to the Turkish Cypriots must be ended," he said.

Noting that the balance in the Eastern Mediterranean has changed, Tatar claimed that the Greek Cypriot side and Greece aim to make Cyprus a "Greek island" and that they want to cut ties with Anatolia, excluding Turkey.

Explaining that in their meeting with Erdogan, they assessed the issue of the "sports embargo", Tatar stressed the importance of paving the way for young people and working on this issue.

Tatar reiterated that they continue to tell the international community that the continuation of the "embargo" against the Turkish Cypriots is "inhumane".

"There are two peoples in Cyprus, there are two states. This is a fact. If a future is to be built, the foundations of the future must depend on these events,” he said.

Tatar said that in his meeting with UN Secretary General Antonio Guterres, he will convey that the position of the Turkish Cypriot side has not changed, as it was announced in Geneva last year.

"We are seeking confirmation of our sovereign equality and equal international status in order to proceed to formal negotiations. We will continue to explain with all our strength that an agreement can only be possible with the cooperation of the two separate states in Cyprus with the will of the Turkish Republic in the context of the balance in the Eastern Mediterranean," Tatar concluded.