Lignadis: "If you speak I will blow your mind" 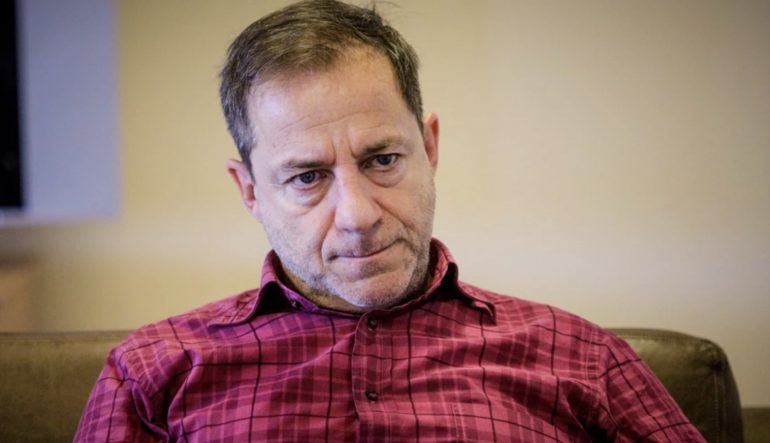 "For me, Dimitris, who (I thought) I knew, disappeared, and in his place a monster appeared. And monsters can not "go to a psychiatrist and get well." "Because they just don't think they're doing anything wrong."

The post of the well-known theatrical critic Marilena Panagiotopoulou embodies the view that has been prevailing for days about the "dark" theatrical man, who for many is now even deprived of the meaning of the word "man", Dimitris Lignadis.

The man who, a few hours before his imminent arrest, maintained a perverted composure, giving an interview to Mega, insisting that history and institutions would judge him.

In fact, he first put the story as a judge for the actions that stirred up a storm around his person, after the revelations, the lawsuits and the testimonies.

Only in his case the story will wait, since the institutions mobilized and his decision to go to GADA yesterday at noon to put himself at the disposal of the authorities, was the last episode of the horrible scene that is gradually being revealed here and days in Greece.

A scene with this dominant protagonist of the horror that allegedly lived 14-year-old children-boys in their majority-some for years in the apartment of Metaxourgio.

Where Dimitris Lignadis raped in a row according to the indictment attributed to him minor boys, even immigrants from a specific NGO.

It took two lawsuits and at least three testimonies to "tie" the indictment against the former artistic director of Ethnikos.

One of these testimonies is said to have been made by a woman who has been in the very close circle of the actor-director for years, who spent his first night in GADA in a 7th floor cell.

After taking the photos with the well-known sign held by the detainee, Dimitris Lignadis talked for a long time with his lawyer, before being taken to his cell.

The "key" woman he testified is photographed as having an employment relationship with him, probably for decades, and her testimony was described as very important.

It was done under extreme secrecy and after its end it left another exit of the Prosecutor's Office and not the normal one, in order to preserve its identity.

It took a rape lawsuit that has been barred by 40-year-old Vassilis, to which the victim referred in another case of a young man who had the same nightmarish experience, in order for the tangle of accusations to begin to unfold.

When the latter was summoned to the Prosecutor's Office, he confirmed what Vassilis was saying about himself, but the most important thing for the court officials was that the crime was "alive" at the time.

On Friday, the second lawsuit was filed by a 25-year-old man today, according to which Dimitris Lignadis raped him at the age of 14, ie in 2010.

He was a child growing up then, without imagining that one day he would face an already famous actor.

Their acquaintance was initially limited to Lignadis' interest in his person, who allegedly met all the conditions for his perverted appetites.

Somehow, the rides with his motorcycle, the attendance of concerts and the compliments of the star for his talent as a child began.

After the gradual manipulation, he invited him to his house and there he decided to express his abnormal appetites to a little boy, who found the courage to talk as an adult about the "darkest" monster of Greek theater.

A man who has never been able, as can be seen from what has been seen in the public eye, to calm his sick passions.

Two years ago he said in an interview that he is addicted to sex and that he is passionate about love, only those who knew him knew two things very well.

That there is never sex with a minor child and that the concepts of passion and love had nothing to do with everything that Dimitris Lignadis did.

The man who many times when talking on a cell phone with a friend, joked in order to invite him for a drink with his favorite phrase: "Do not be late. Put on a bra and come! "

The nights of horror

The stories about the nights at Metaxourgeio and Lignadis' penthouse had started to leak strongly in recent weeks.

Neighbors often saw underage boys going up to the actor-director's house, some from Greece and others immigrants.

The latter went, of course, unaccompanied by a specific NGO and a specific social worker who allegedly knew the director of horror very well.

Almost none of them wanted to go to Lignadis' house again, telling his neighbors that he was teaching them lessons, apparently because he only did not teach them lessons.

It is alleged that the perverted soul of a man was hidden from them, who, as has been said in one of the lawsuits, also included students from "Arsakeio".

As his colleague said a few days ago in a conversation with a friend, Lignadis is said to have acted with the motto "I slaughter everything, I stab everything".

Everything, as long as they are young or minor, since any interest he lost when they entered the age of nineteen or twenty, say experts in the field from the theater.

As stated by a defendant, "slaughter and stabbing" sometimes included the supply of drugs and alcohol to boys, for obvious and unspoken reasons.

The theater breathed a sigh of relief at the arrest of the man who probably believed he would always be a king of horror, with his sexual subjects little boys and more rarely unborn girls, who always wanted to have very short, boyish hair. You do not even have to wonder why.

From the cell to the interrogator

Last Tuesday, Dimitris Lignadis went for a while to the penthouse of Metaxourgeio with a friend, to get some clothes and personal items.

The information says that he was now persona non grata for the other tenants of the building and he had probably received the message.

Collecting signatures to evict you from your home shows, if nothing else, that no matter how much you deny everything, even after lawsuits with creepy details, you are no longer wanted.

The last few days he was staying at the house of a friend, whose address he had given to the authorities, a first move to show that he is not a fugitive suspect, a key reason for his detention.

The second was to go voluntarily to GADA on Saturday afternoon with his lawyer and ask if there was an arrest warrant for him.

Today or tomorrow at the latest he will go to the interrogator, in order to ask and receive a deadline to apologize, while until then he will be kept at the General Police Directorate of Athens.

If he is found suspected of committing new crimes or despite the moves he made as a fugitive suspect, he is expected to be remanded in custody immediately.

According to his lawyer, Dimitris Lignadis, who is perhaps the only one who characterized him as an honest man and honest in his thoughts, insists on his innocence.

And this obsession is the same of people who believe that even after the crime will not be punished as happened in Dostoevsky's novel.

Some have recalled that a scene from Shakespeare's "Richard III" fits his case, where Lady Anna tells the king that "Even the wildest beasts feel a drop of compassion" and he replies: "I do not feel, because I am not wild beast ".

Indeed, Dimitris Lignadis is not a wild beast, but rather something much worse.