The formation of the Deryneia roundabout has reached its end (VIDEO)

Watch the progress of the project until its completion in a video. 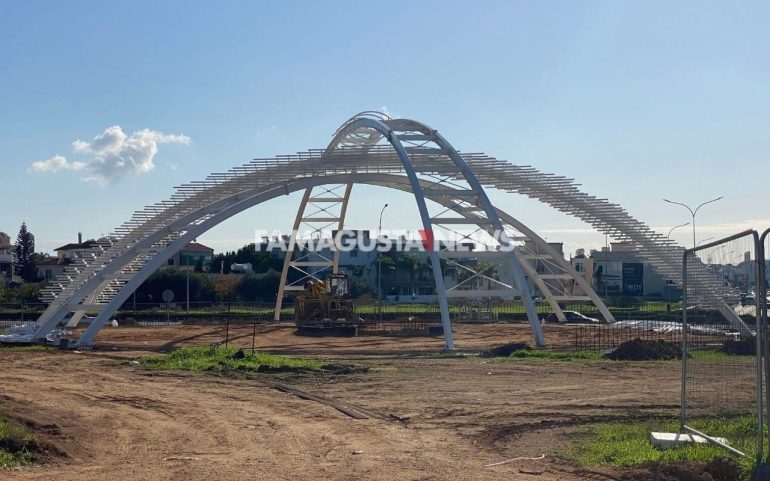 This is a roundabout which until today, from the day of construction of the road that connects the 1st of April Avenue (“bypass”) in Paralimni with Eleftherias Avenue in Deryneia, had received strong criticism as well as comments on social media and beyond. after it remained unexploited for several years.

Nevertheless, recently, with a pleasant surprise, the residents of the area and the passers-by saw that they were slowly starting reconstruction projects of the roundabout, with the result that today, the formation of the Deryneia roundabout has reached its end.

Τyou say big white metal arches, in the style of the architectural masterpieces of the internationally acclaimed and well-known Spanish Architect and Civil Engineer Santiago Calatrava, which are the subject of discussion in terms of what they symbolize.

A project which symbolizes the past, the present and the future, includes the central metal structure, the landscaping of the green areas with the placement of approximately 7 thousand plants and special lighting thus giving a complete image day and night.

See through the video prepared by the Municipality of Deryneia, the progress of the project until its completion.

December 4, 2019 – The Circular Junction of Eleftherias Avenue was one of the topics on the Agenda of the 21st Session of the Deryneia Municipal Council.

June 14, 2021 – The Contract for the Design and Landscaping of the Deryneia Roundabout was signed

July 18, 2022 – One year later, the formation of the Deryneia Roundabout has come to an end.