Hippolytus of THOK tonight in Deryneia 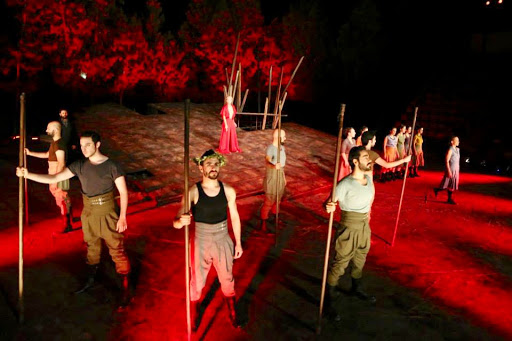 The Theatrical Organization of Cyprus, presenting its big, summer performance last week with the tragedy of Euripides "Hippolytus" continued the series of great performances of winter. "Hippolytus", therefore, is added to the list of the best performances of the year after the emblematic "Third Wreath" and the explosive "August" that we saw this year on the Main Stage of the state theater, raising, in fact, the bar and the horizon of our expectations for the next theatrical season. Hippolytus, son of Theseus and the Amazon Hippolytus, is a faithful follower of the goddess Artemis. He abhors love and does not honor Aphrodite. So the goddess to avenge him inspires love in his mother, Phaedra. Trying to help her, Trofos reveals her secret to Hippolytus, after making him swear that he will not say it anywhere. He leaves scolding and cursing women. Phaedra, trying to save her honor, accuses Hippolytus of dishonoring her. Theseus, blinded by rage, curses his son who finally faces his fate. Hippolytus was taught in 428 BC. A few years ago, Euripides presented another tragedy with the same theme, but it was condemned. So the tragic poet returns by rewriting the tragedy and wins the first prize, one of his only four victories. The public of Athens of 428 BC. is shocked by the political developments as we are today. But what does a work of a "forbidden" love have to tell us? The work is not just that… Three years before this work was presented, the Peloponnesian War began, the outcome of which no one knew, and in the face of these facts man is degraded, even today. Euripides dares in this tragedy to demystify the value system of his time. Because today the institutions and values ​​of society are questioned, modern man, disappointed, follows an anti-heroic course, full of passions and loneliness, which often leads him to destruction. Who is Hippolytus? The young man, the one who denies the legacies of the previous generation? Is it perhaps the wronged generation of young people of our time? Is it the young man who is devalued for politics or love?Translation: Fotis Fotiou
Adaptation: Neoklis Neokleous, Fotis Fotiou
Directed by: Neoklis Neokleous
Sets / Costumes: Haris Kafkaridis, Melita Kouta
Music: Neoklis Neophytidis
Teaching Songs: Christina Argyri
Choreography: Fotis Nikolaou
Motion: Neoklis Neokleous, Fotis Nikolaou
Lighting Design: Stavros Tartaris
Assistant Director: Fotis Fotiou