Cyprus is a gateway for Chinese products to the European Union 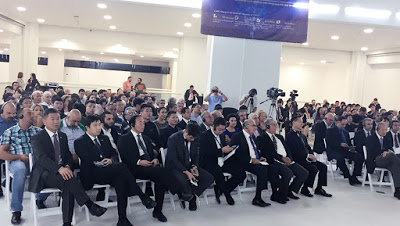 A representative of the Minister of Commerce, conveyed a greeting of George Lakkotrypis, who stressed "the exhibition of Chinese products will not only help China expand its exports to Europe, the Middle East and North Africa and will act as an incentive for cooperation between of our two countries ".

The fact that Chinese companies have chosen Cyprus as a gateway to neighboring countries to showcase their products reiterates China's active role in the Eastern Mediterranean, he said. In addition, he added, it underscores the country's potential to positively impact economic growth. He noted that the value of trade goods between the two countries amounted to € 250 million in 2015 and we expect similar performance for this year.

Huang Yaping, Economic and Trade Advisor to the Chinese Embassy, ​​described Cyprus as key to the Mediterranean Sea. "Cyprus is a gateway to the huge European market and a gateway to the markets of the Middle East and North Africa," he said. According to him, China is the sixth largest trading partner of Cyprus, with the volume of trade between the two countries growing rapidly after the island's accession to the EU with the trade volume skyrocketing from 187 million dollars in 2004 to 1.36 billion dollars in 2010. However, after the economic crisis in the EU and the crisis in Cyprus, trade volume remained stagnant at $ 1 billion, with the volume falling to € 640 million last year, which corresponds to 25% of the trade volume between China and Malta and Luxembourg. respectively. However, he noted that achieving economic growth in Cyprus and overcoming the crisis, Mr. Yaping is now a good time for Chinese companies to enter Cyprus and take advantage of the opportunities created by the Cypriot market and the surrounding markets. The President of IMC, which houses the exhibition, Andreas Kaisis described the exhibition as the first steps towards the implementation of the strategic cooperation agreement signed in October 2015 between IMC and the Chinese regional light industry. Cyprus can be a hub for the products of light Chinese industry and will strengthen economic relations between the two countries, he said. Referring to the plans for the old Larnaca airport, he said that the main elements of the project include a state-of-the-art exhibition center, a huge shopping center, a conference hotel, a sophisticated business center that can accommodate the needs of exhibitors and visitors, an electronic warehouse trade for Chinese products and storage and logistics.

On behalf of Euromed TDS, Donadella Loutsate stressed that the launch of this initiative will turn Cyprus into the center for trade and the provision of services that are necessary in the Mediterranean region.

On behalf of the President of OEB, George Petrou, said that Cyprus is not the ideal gateway to the EU, but opens avenues for Chinese companies in the promising markets of Africa, the Middle East and Eastern Europe.

Finally, the Mayor of Strovolos, Lazaros Savvidis, stressed that the opening of the exhibition is another step towards strengthening cooperation between the two countries.