The wheelchair of Mr. Adamos Kkafas from Sotira is full of love and pain 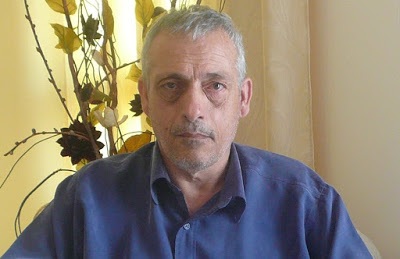 It causes so many bad surprises that they can destroy what a person has made and felt more beautiful. A slap in the face can shatter every dream and every hope. Fate strikes some of our fellow human beings mercilessly and woe to those who are not close to their families. Only if one feels the love and support of one's own people can one endure misery and stand the test.

They are people who in their lives…

They suffer from a lot of diseases. One blow follows another but they endure, because they have their families who do not bend and stand by them, with strength and courage. They love and care for them without complaining and without hurting them. As in the case of Mr. Adamos Kkafas from Sotira in the province of Famagusta.

I was taking a lot of pills every day until 2006, when I had a stroke
He was a handsome man full of life and strength. Unfortunately, he had to deal with all those health problems that did not allow him to breathe for a moment. But in the midst of his great misfortune, he was lucky…

Mr. Adamos with great difficulty - as he has a speech problem - managed to tell us about his life. "At the age of 25, the first health problems started. Type 2 diabetes was the first disease that knocked on my door. At some point the insulins started and a few years later, the first heart attack came. I was hospitalized for a while at the General Hospital of Nicosia and later at the General Hospital of Famagusta. Then, after waiting my turn - the wait lasted a month - I was taken to a hospital abroad, specifically in England where I did a by-pass.

When we got back, things started to get better. I was glad that my Golgotha ​​would end somewhere here and nothing bad would happen to me. Unfortunately, only a year later new sufferings began…

My heart started to pound again but the doctors could not do anything because of the recent by-pass. Two years later, I contracted Acute Leukemia. I was hospitalized at Makarios Hospital. The chemotherapy started and as if that was not enough, I also had the problem of diabetes which while we had managed to regulate, it got worse. After a very short time I also suffered from pancreatitis. I was taking a lot of pills every day until 2006, when I had a stroke.

I was in the room trying to yell at my wife who was out in the yard but I could not, I did not have the strength. They found me after a while holding my head and crying. I was taken to the First Aid and the doctor there, after examining me, assured me that it was not my heart and that I should not worry.

The possible reason he did not understand that it was a stroke, was probably because he did not leave me a scar as is done in most cases. After three days the doctors decided to send me for an X-ray. When they realized it was a stroke, I had to be hospitalized again…

From the moment of the stroke but also the whole time I was hospitalized, I do not remember anything at all. They have been erased from my memory as if those moments never existed. I really can not explain why.

The biggest shock for me came when…

Shortly before I was discharged from the hospital, I tried to get out of bed to walk for a while. But I realized that I could not do it. No matter how hard I tried, I could not stand on my own two feet.

I was very upset and did not know if my soul could find the strength to withstand the new facts of my life. The fact that I could not walk again…

It was the biggest hit of all. My whole world was shattered. Everything was extinguished, suddenly lost in the deep darkness of my soul. It hurt me unimaginably that now I could not offer to my family like all other husbands and fathers.

I wanted to shout at them with joy: "I did it, I can and I stand on my feet, I walk"

It took me a long time to be able to accept it. For six whole years I did physical therapy in the hope that at some point, I would be able to get up and walk.

A few years ago, when I happened to be alone in my room for a while, I wanted to try it. But the result was that I fell and hit my knees. I inadvertently caused panic in my family.

Kula ran first and then shouted at the children. They picked me up from the floor and put me back on the bed. They cried with tears but my heart was burning too. The pains were not only physical but also mental. I tried to get up because I wanted the children to see me and my wife to stand on my feet.

I wanted to shout at them with joy: "I did it, I can and I stand on my feet, I walk", but unfortunately the dream did not come true. My wheelchair seems to have gotten so used to me that it can not leave me…

I am very sorry that I can not walk, speak clearly but also stop trembling. My whole body trembles and more my hands. After the stroke, no doctor could stop my trembling. I have suffered unbelievably all these years in the hospitals. One illness followed another, with the result that I did not enjoy my life and family for a moment.

My soul is like a wound that bleeds day and night. If I did not have my wife and children, Maria, Nicholas and Louisa with me, I certainly would not be alive at this time. Their excessive love and care keeps me alive. My wife is the greatest heroine! He takes care of me and at the same time works in our store (super-market). The fact that I am too thin makes her job easier. He is tortured and very tired, but he always smiles at me and when he has a job he always makes sure to have someone by my side so that I never feel lonely.

Now with our grandson my life has changed a lot. I smile and I am glad to see us all so loved together. The power in my soul is my family.

"Every blessing and only joy should have all the families of the world and may no one ever experience what I have experienced".