Karousos: Financial support to the Municipalities of Deryneia and Sotiras

Financial support to the municipalities of Sotiras and Deryneia for the rehabilitation of their road network, the Minister of Transport, Communications and Works Yannis Karousos announced today 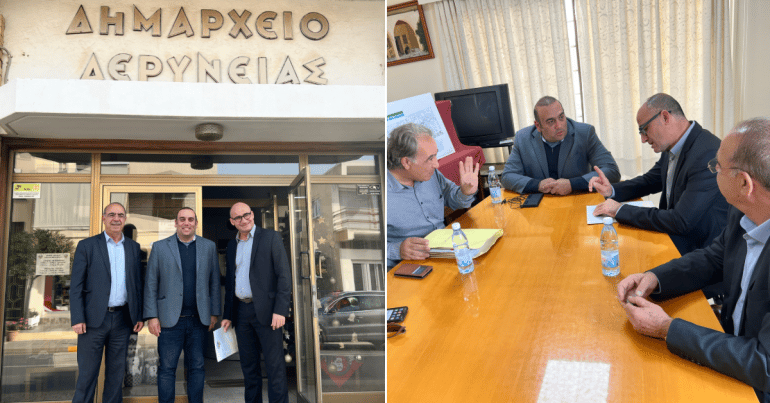 Financial support to the Sotiras and Deryneia Municipalities for the restoration of their road network, the Minister of Transport, Communications and Works Yannis Karousos announced today, adding that the Ministry subsidizes up to 100% the restoration of important ancient monuments, such as churches, monasteries, chapels and even fountains.

He added that "to the Municipality of Deryneia, which submitted a comprehensive plan to improve its road network, we will grant the amount of 800 thousand euros, so that it can go ahead and implement this plan itself. With this sponsorship, the Municipality of Deryneia, with the help of the government and after the known problems with the Sewerage System, will have an upgraded and improved road network".

He also stated that with the grants that will be given to the Municipalities of Deryneia and Sotiras, "the process of upgrading and improving the road network of Municipalities and Communities of the free province of Famagusta, which were affected by the Sewerage System, is completed. Through grants from the state, the road network has now been improved and any issues that arose when the Sewer was being built have been repaired."

The Mayor of Sotira Georgios Takkas expressed "satisfaction with the announcements of the Minister of Transport regarding the sponsorship" and noted that "besides the money received from the government there are also European Programs that have been approved for Sotira. Among them is the creation of a new road, south of the B Primary School, a project of the order of 2.300 million euros and the park in the center of the Municipality, amounting to 700 thousand euros".

May he continue "that the economy will always do well and that the government will be able to finance developments and improvements both in road networks and for other projects in Municipalities and Communities".

For his part, the Mayor of Deryneia Andros Karagiannis expressed his joy because as he explained "the Minister of Transport recognizes that the road network both in Deryneia and in the other members of the Kokkinohoria Sewerage Council has been badly affected by the construction of the sewerage network that began in 2010 With this enhanced sponsorship of the order of 800 thousand euros, the upgrading of the road network in the rural Municipality of Deryneia will be completed, which is particularly pleasing to the citizens and the local authority".

He added that "one of the priorities of the Municipality of Deryneia is the upgrading of ancient monuments under the jurisdiction of the Ministry of Transport, such as the Medieval Pit of Agios Konstantinos, and we have requested an additional grant from the Ministry to highlight this pit, which shows how important they were the burrows were during the Middle Ages for the history and culture of Cyprus. Special efforts have been made by the Department of Antiquities, through the Ministry of Transport, to upgrade the church of Agia Marina within the dead zone."

He also mentioned that "Phase C of the upgrade of this Byzantine chapel has also been completed and we expect the Minister of Transport to give an additional grant to complete the work. To operate as a Municipality of Deryneia within the dead zone an important church in July and on Clean Monday is important and also sends political messages.

In response, Yannis Karousos said that "through the Department of Antiquities, the Ministry subsidizes up to 100% the restoration of important monuments, which are in Table B, especially churches, monasteries and chapels which are ancient monuments and even fountains which are under the jurisdiction of local authorities or the local Ecclesiastical Committees or Metropolitans. We will subsidize and cover the cost of restoration both regarding Lagoumi and the Church of Agia Marina and the Church of Sotiros located in the Municipality of Sotira, which are included in a series of projects that are being restored throughout Cyprus."

We consider it our duty, he continued, "to our cultural heritage but also to our society, to subsidize 100% of the cost, because the restoration of these monuments is also for the next generations. We will continue with the cooperation of the Municipalities and Church Committees to carry out this restoration throughout Cyprus and very often we see quite good work being done".

He also stated that "with the help of the Municipalities, since they will do the studies and proceed with the offers, we will cover 100% of the costs for the Holy Church of Sotiros in Sotira and ancient monuments in Deryneia. We have invested eight million euros in the restoration of ancient monuments in recent years and we will continue at a fast pace."

In response to a related question, Mr. Karousos said that "at the moment, a shelter has been created at the Holy Church of Sotiros, with a grant from the Ministry of Transport, some excavations are being carried out and upon their completion, a comprehensive study will be carried out for the restoration and promotion of the Church so that become more accessible for both locals and tourists".

Asked whether antiquities were also found during the excavations, the Minister of Transport replied that "there are antiquities everywhere in these Temples. The excavation is being evaluated and that is why we did not proceed sooner with the restoration since the excavation had to be completed. Then the Ecclesiastical Committee together with the Municipality of Sotiras will submit a comprehensive study which will be approved by the Department of Antiquities and we will proceed with the restoration of the Temple of Sotiras".