Portugal: In a state of alert due to the fires 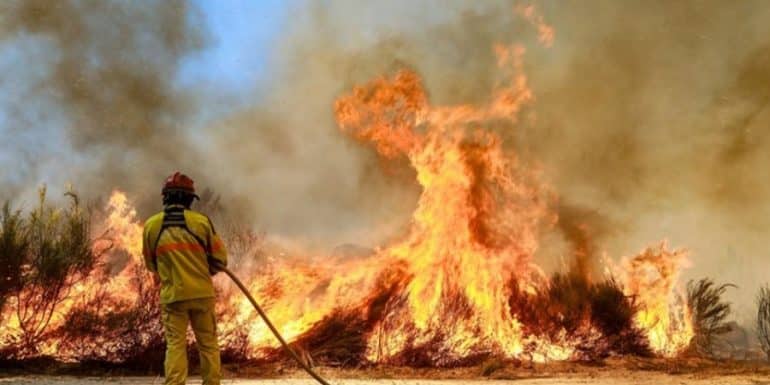 Portugal, which has been hit by a third heat wave since the beginning of July, is fighting several fires today while the country is on alert until tomorrow, Tuesday, due to an increased risk of forest fires.

This morning, almost 1.800 firefighters were battling to put out the flames in Portuguese territory, according to data from the civil protection service.

The most important fire is raging in the Vila Real region of northern Portugal, spreading inside a mountainous zone with difficult access.

The state of alert, which was declared yesterday, Sunday, by the government, mainly restricts access to forests and prohibits the use of machinery or displays of fireworks to prevent wildfires.

It also aims to strengthen the levels of mobilization of rescue services and their powers.

For today and tomorrow, Tuesday, the Portuguese Meteorological Institute (IPMA) predicts temperatures around 40 degrees Celsius in the interior regions of the country.

Portugal, which is experiencing exceptional drought conditions this year, has already recorded its hottest July in nearly a century.

Since the beginning of the year, almost 940.000 hectares have burned in the country. These are the largest burned areas since the deadly fires of 2017 that claimed 100 lives, according to the latest tally by the Institute for the Conservation of Nature and Forests (ICNF).

The forest fire alone in the Serra da Estrella National Forest, a protected mountain region in central Portugal, has consumed more than 250.000 hectares of vegetation in recent weeks before it was declared under control on Wednesday.