PtD: A delegation of the Volunteering Council and EPOE EOSEK was received 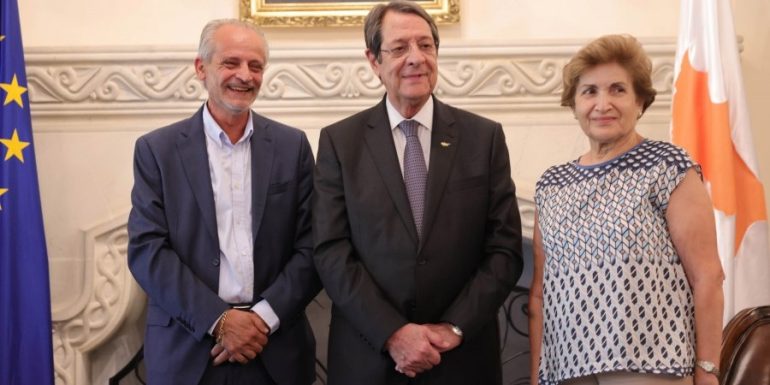 The President of the Republic, Mr. Nikos Anastasiadis, received today, at the Presidential Palace, a delegation of the Pan-Cypriot Volunteer Coordinating Council, which handed him a check with an amount that is a fundraiser for the fire victims in the provinces of Larnaca and Limassol.

Handing over the check, the President of the Council, Mr. Ilias Dimitriou, said that "the voluntary movement always declares itself present in the difficulties that exist in Cypriot society and beyond. It is a long-term process that concerns fundraisers in Cyprus and abroad."

He also referred to the excellent cooperation of the Council with the Citizen's Commissioner Mr. Panagiotis Sentonas regarding the aid sent to Ukraine "feeling the pain of the refugee that Cyprus went through in 1974", as he said.

For his part, President Anastasiades expressed warm thanks and congratulations "because the volunteering movement in Cyprus has developed to the extent that it is a model in many European and other countries through the humanitarian assistance it provides in times of need and not only for the Cypriot people, but also for those other countries that are in need through catastrophic consequences.

And the Cypriot people proved, especially through the voluntary movement, that they have humanity, that they have that alloy of mentality that they cannot remain indifferent to what is happening on our planet".

He added that the amount handed over by the Council, which amounts to 16.300 euros, will be deposited in the General Accounting Office for the needs of the fire victims and he wished every progress in the efforts made by the Council.

For his part, the President of EPOE EOSEK, Mr. Antonis Chrysostomou, handed over a check of 20.000 euros on behalf of the trade union organization of ATIK, noting that ATIK employees declare their presence in various projects concerning society, such as fundraisers, tree planting and other actions.

Besides, he personally thanked the President of the Republic for the issue of the non-equity of ATIK with the withdrawal of the relevant bill as well as for the abolition of the provision of the Regulation for redundant staff at ATIK, which was abolished after 60 years of being in force, with a policy decision of President Anastasiades.

For his part, the President of the Republic expressed thanks to the employees of ATIK who "inspired by the same spirit of volunteerism have today demonstrated how interested they are not only in trade union matters, but also in the social or other problems that arise", noting that "the multifaceted , multifaceted action proves to you that healthy trade unionism is the one that leads to success".

Finally, he stated that the issues that concerned the guilds were resolved due to the wisdom of the trade unions and the assessment of rationality on the part of the Government with the aim of avoiding mishaps.