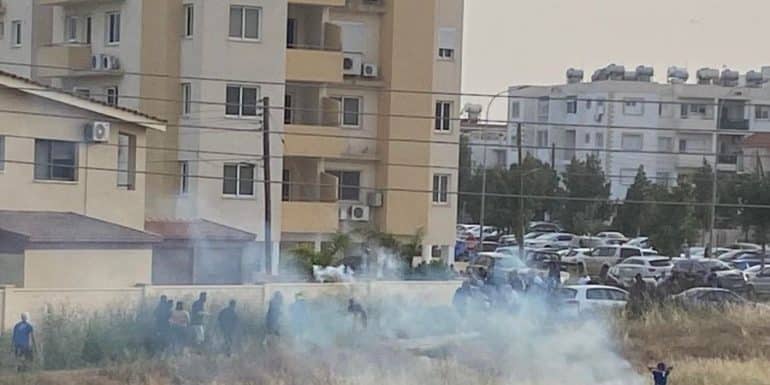 The two people, aged 3 and 22, will appear before the Larnaca District Court on June 30 in connection with the incidents that took place outside the "Antonis Papadopoulos" stadium in Larnaca, on Saturday, April 30.

As Haris Hatzigiasemi, spokesman for the Larnaca Police Department, told KYPE, "today, Thursday, May 19, the two people were scheduled to appear in court to be charged for the crimes they committed. However, the 30-year-old was not able to be located in order to serve the summons to appear in Court, with the result that the House set June 3 as a new date ".

He added that "the lawyer of the 22-year-old told the Court that he did not receive the copies of the testimonies for the case and asked for time in order to respond to the accusations. The court also set June 3 as the date for the charges against him. "

According to Mr. Hatzigiasemis, "the Police submitted a request for the exclusion of the 22-year-old from the stadiums and the Larnaca District Court issued an exclusion order from all stages of free Cyprus until June 3, when he will be charged with the crimes he committed."

It is recalled that on May 5, the Police registered the case against the two people, aged 22 and 30, before the Larnaca District Court, which set May 19 as the date on which they will be charged with the offenses of harassment, use of dangerous objects. and illegal possession, transport and use of explosives.

The two people were among the ten whose photos were published by the Police for the incidents that took place outside the "Antonis Papadopoulos" stadium in Larnaca, before the football match between Anorthosis and Apollon, on Saturday, April 30.

According to the spokesperson of ADE Larnaca, "the 30-year-old had presented himself to the Police on Monday, May 2, and admitted that he was one of the persons wanted by the Police for the incidents. The 30-year-old interrogated allegedly admitted his participation in the incidents and was charged in writing, with the offenses of harassment, use of dangerous objects and illegal possession, transport and use of explosives ".

The 22-year-old appeared on the night of Monday, May 2, at the TAE Limassol, where he was accused in writing of participating in a riot, attack and fight.

The case is being investigated by the Larnaca Police Department.