Ministerial: Extension to the reduced VAT on fuel-"We are doing everything we can" (BINTEO) 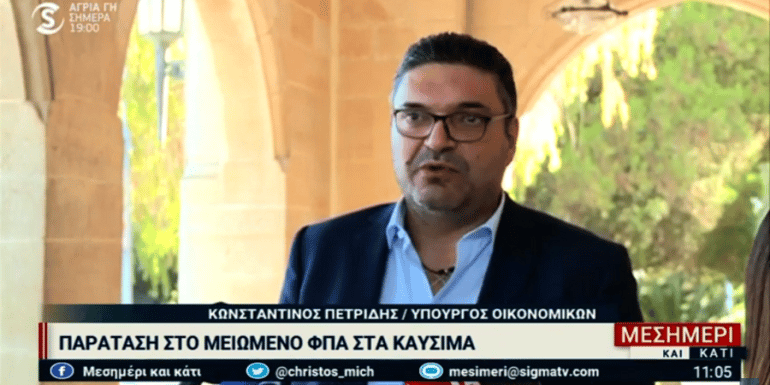 The extraordinary Council of Ministers led by Annita Dimitriou was completed to extend the validity of the measure to reduce the fuel consumption measure for households and businesses.

The extension of the measure in question is also the claim of all consumers as well as the social partners for the relief of the budgets mainly of electricity which are affected by the prolonged accuracy.

After the end of the Council of Ministers, the Minister of Finance stated that the extension of the reduced VAT on fuel was a decision they took 3 months ago in order to relieve their citizens from the rising fuel prices and he considers it appropriate until January 15 to remain this relief.

At the same time, he added, with the reduction in oil prices, the Government decided today to extend this relief through the reduction of the consumption tax. The new measure for the next 3 months is about 7 million euros and brings the total cost for fuel alone to 33-35 million euros.

We will always monitor them and, depending on our capabilities, we will take measures, which will have an effect without exhausting from the first moment this stock that we have", he emphasized.

As far as public finances are concerned, he said that the coming years will be difficult. "I know that these do not solve the problem and we cannot alone nationally face inflation and the world must also get used to savings. Other countries have also taken drastic measures in terms of savings and unfortunately we have to adapt to the new era. The state has proven that within its capabilities and with rationality and without populism, it does what it can, which is much more than what the washed-up countries of the EU have done," concluded Mr. Petridis.