"Cyprus-Tomorrow": The facts and the five pillars 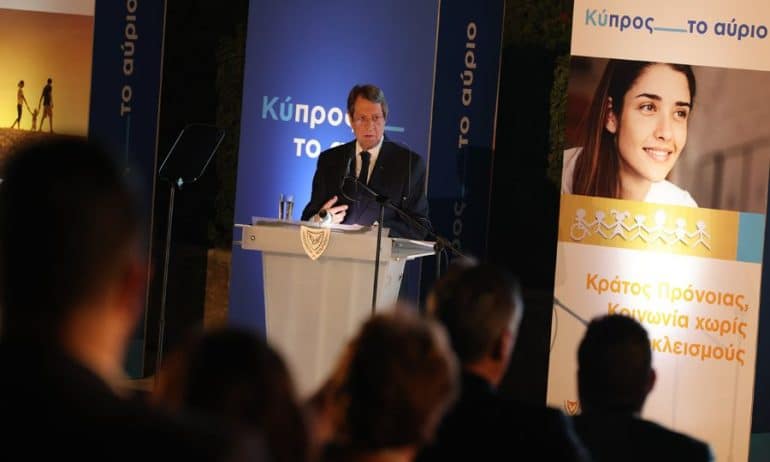 His conscience is clear because he responded to his pre-election commitments "to create a real welfare state without exclusions, supporting in practice those of our fellow citizens who are in need", said the President of the Republic Nikos Anastasiadis, speaking on Tuesday night, at an event for the presentation of the Pillar "Welfare State - Society Without Exclusions" of the National Plan "Cyprus - Tomorrow", which took place at the Presidential Palace.

During his speech at the event, which he characterized as a political memorial for Zeta Emilianidou, President Anastasiades testified about the achievements of his Administration, as well as the related to the produced project, the "Cyprus-Tomorrow" Plan, which through 56 reform forecasts and 74 investment actions is his legacy, as he said, for a modern European state.

The following is the summary of Nikos Anastasiadis' speech

I am going through the last months of my ten-year term at the Presidency of the Republic and for this reason I consider it an imperative duty to the people to report the deeds of the Government, but also the work connected with the work produced, the "Cyprus-Tomorrow" Plan, which through 56 reform forecasts and 74 investment actions constitute my legacy for a modern European State.

The account of the ten years of governance will be done by sector or a combination of policy sectors, based on my programmatic statements either during the first or the second term for the Presidency, always in relation to the "Cyprus-Tomorrow" Plan.

The first chapter or pillar of the account is the obligation of the State to build a real Welfare State without exclusions.

A State sensitive and capable of assisting the needs of all citizens, but especially those who need state care and protection.

The listing of the Government project and the provisions of the "Cyprus-Tomorrow" Plan, will be analyzed in 5 sections:

• The first section is about reforms and radical policies that established the Welfare State.

• The second, measures to support the elderly.

• The third, supporting citizens with disabilities or developmental disorders.

• The fourth, the support of special categories of population.

• The fifth, the support of families.

The first section concerns a series of reforms that established the Welfare State.

(1) Reform and rationalization of the benefit beneficiary system and criteria.

It was established from the first moment that there was no single register of beneficiaries receiving support benefits, with the simultaneous operation of four Services in various Ministries without any interconnection between them, with the result that a number of citizens took advantage of the loopholes and the absence of control, which was at the expense of the actual those in need.

A second negative element was the inhomogeneity of the criteria for granting allowances in each of the services.

Upon ascertaining the distortion, we proceeded to abolish the various services and unify them into a single entity and bring them under the materially responsible Ministry of Labour, Social Insurance and Welfare.

At the same time, a uniform register of beneficiaries was created, as well as uniform objective criteria for those in need of State support.

In order to understand the distortion, it is enough to mention that with the creation of the Registry, it was found that thousands of recipients of public assistance were not beneficiaries due to undeclared incomes and deposits in banks that in some cases exceeded 1 million.

(2) Introduction and institutionalization of the Minimum Guaranteed Income.

The rationalization of the system was accompanied by a new radical policy through the introduction of the Minimum Guaranteed Income, which created for the first time a real social protection net for our most vulnerable fellow citizens.

In addition to ensuring the Minimum Guaranteed Income, the beneficiaries additionally benefit from the rent subsidy for a rented house, interest subsidy for a housing loan, the provision of a Christmas gift, the coverage of Local Government Fees and care needs, a 20% discount on the electricity consumption bill and provision of free health services through GESY.

With the introduction of the Minimum Guaranteed Income and the rationalization of the until then public assistance system, the corresponding costs for beneficiaries increased by 24% from 2014 to 2021, with a total expenditure of €1.7 billion.

(3) Establishment of the National Minimum Wage.

From this reform, 40 low-wage workers will benefit substantially with a significant increase in wages, while another 60 of our fellow citizens will be positively affected in terms of their wages, to a lesser extent.

I know the reactions, but it should be understood that we have finally become one of the countries that have adopted the National Minimum Wage. Any other possible differences should be discussed in the Labor Advisory Body, while it should not be overlooked that after one year we will have a review and then a biennial review.

(4) Establishment and implementation of the General Health System.

This is a reform that, after decades of studies, became a reality for the benefit of all citizens, but particularly the vulnerable groups of the population.

(5) In order to strengthen the distinct role and policies that a welfare state must distinguish, we proceeded to establish the Deputy Ministry of Social Welfare, upgrading the structures of social services with the implementation of the Social Welfare Services Restructuring Plan.

(6) We established the minimum guaranteed pension which ensures that no pensioner will live below the poverty line.

(7) A widow's pension was instituted for men as well.

(9) A woman's right to maternity leave for children obtained through a surrogate mother was secured.

(10) Established for the first time, a Christmas allowance to:

(b) mothers of many children

(c) recipients of public assistance and

(11) For the first time we created Disability Assessment Centers.

(12) Establishment of a pension for thalassemia patients from the age of 50.

(13) Establishment of transportation allowance for thalassemic and kidney patients.

(14) Restoration of the Provident Funds of the workers with a contribution of 75% from the state.

(15) Within the next few weeks, the Pension Fund of public and semi-public sector employees who were hired after 2011 will be instituted.

(16) An equally important reform is in the final stages of consultation. I am referring to the Reform of the Social Security Pension System.

(17) Digitization and the electronic submission of requests for the payment of all benefits are progressing, with the aim of combating bureaucracy and the need for beneficiaries to be physically present at the provincial offices of the competent Ministries, as well as shortening the time for payment of benefits.

(18) In the final stage and will be implemented before the end of my term is the introduction of the right to 2 months paid parental leave for parents with children up to 8 years of age.

(19) Family law is in the process of being reformed and modernized, with bills that are before the House of Representatives and I hope that within the next few weeks they will be voted into law.

In addition to the above radical reforms and as a result of the correct fiscal policy, the Government was allowed to restore a number of benefits that had been abolished before the assumption of the Presidency, to give increases in provided aids, but also to introduce new social welfare benefits, with an additional annual expenditure over 211 million euros.

More specifically and indicatively, I mention:

(a) We have reinstated 4 benefits that had been abolished, with a total annual cost of 22.5 million euros concerning people with disabilities, large families and low pensioners.

(b) The cost of new allowances exceeding 10 amounts to 110 million euros per year.

(c) We increased existing benefits by 78.2 million euros per year.

The significant increase in the expenses of 2013 compared to those of 2021 which show an increase of 24%.

The fight for a Welfare State does not stop with specific actions. And this, because exogenous or other unpredictable factors, such as pandemics, wars, may create new obligations for the State.

This is why a completely flexible, accessible and citizen-friendly system of social solidarity is needed. The future planning and actions included in the "Cyprus - Tomorrow" Plan are part of this direction.

A plan, which is a continuation of the social welfare policy to date and which aims, among other things:

(a) To further reform and improve the operation of the Benefits Management Service, with the creation of a single computerized system to reduce time to zero when examining applications.

(b) In the reform of the Social Welfare Services sector, with the aim of faster social integration and more effective safeguarding of the rights of vulnerable groups of the population.

(c) In order for the State to be close to the citizen, a new program is adopted with the recruitment of professional social workers who will be based or travel to communities or clusters of communities, so that, in cooperation with local authorities, those who they need the social assistance and support of the State.

The Program has already been launched and a tender was announced to secure the services of the first 25 social workers.

(d) The expansion of the institution of Counseling Centers for single-parent families and the elderly, as well as Child and Adolescent Protection and Employment Centers and Youth Centers.

Despite what has been achieved or envisaged in the "Welfare State, Inclusive Society" Chapter, it will not the realities as they are shaped as a result of the Russian invasion of Ukraine and the subsequent consequences of the sanctions imposed or potentially imposed on Russia.

It is a new exogenous economic crisis that causes inflationary trends, price increases and a consequent reduction in the purchasing power of citizens, with a particular impact on the vulnerable groups of the population.

I assure you that with the same sensitivity and efficiency with which we dealt with both the financial crisis of 2013 and the health crisis of 2020, we will deal with the current crisis within the framework of the State's financial capabilities.

Already a package of support measures amounting to 350 million euros has been adopted to support low pensioners, vulnerable groups, farmers, but also horizontal support for citizens through the coverage of the increase in electricity from the current month and the reduction of fuel taxes movement and heating.

At the same time, based on the economic capabilities of the State, new measures are constantly being evaluated and studied that can potentially be adopted to further support the economy and relieve the vulnerable groups of the population.

What I mentioned, with specific facts, indicators and numbers, are only a small part of the most important and essential actions that we have adopted and are implementing with the aim of creating a real welfare state.

And this is because they are included in other policy chapters about which I will make an extensive report in the coming weeks.

It is worth noting that during the exercise of the above actions, not only did we not reduce or abolish any social welfare benefit, but instead we proceeded to restore benefits that had been abolished by the previous government, to increase existing benefits and to introduce new benefits.

What I want to emphasize is that I have a clear conscience because I responded to my pre-election commitments to create a real welfare state without exclusions, supporting in practice those of our fellow citizens who are in need.

And it is this continuous effort to upgrade, both quantitatively and qualitatively, the social protection network to ensure a decent living and equal opportunities for all our fellow citizens that constituted the specific policy objectives, amounting to 315 million euros, adopted in the National Plan "Cyprus - the tomorrow".

A project that is the culmination, the completion of the work we have started and the legacy, not only to the next government, but to all citizens, each and every Cypriot.