Achna Forest: Increased interest in the sampling in Achna Square during yesterday. 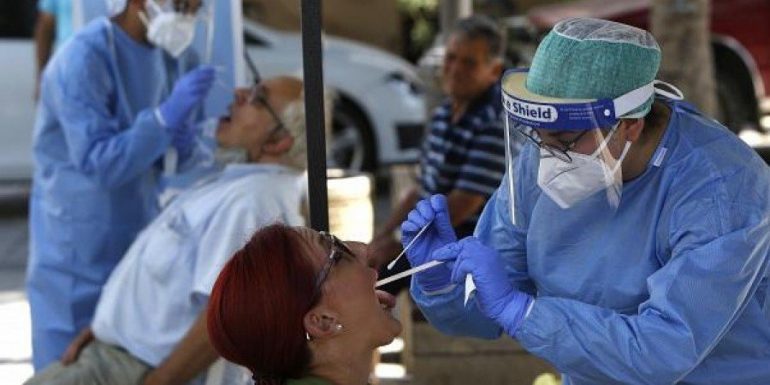 The sampling for three thousand people is being completed today in Larnaca and Achna, with the aim of examining the citizens for coronavirus, after the case chains Covid-19, located in the city and province.

It is noted that on Friday 600 samples were taken at the two sampling points in Larnaca, on Saturday 755, on Sunday 500 and yesterday Monday 535 samples.

A total of 2.390 people came and gave a sample until five yesterday afternoon and the results for the 1.363 were announced, of which five cases were identified.

The sampling points are the parking lot of Neos GSZ and the municipal parking lot on Tasos Mitsopoulos Avenue in the area of ​​Mackenzie.

Sampling is free and will take place from eight in the morning until five in the afternoon. The public is obliged to use a face mask and keep the distance of two meters.

Meanwhile, in the community of Achna, 427 people came yesterday, Monday, to the sampling area, which is the square, and gave a sample for coronavirus.

As the Common Leader Nikos Vassilas stated in KYPE, "the people of Achna are very worried about the outbreak of the coronavirus, as a result of which there is an influx of people to give a sample. "Yesterday the sampling was completed earlier than scheduled due to the lack of reagents used to take the sample from the citizens, resulting in about 150 people waiting in line to give a sample to leave idle."

He added that "a total of about 600 people from the Community are expected to sample. We appeal to the state and the Ministry of Health to provide other reagents in order to take samples from people who did not give yesterday ".

Answering a relevant question, Mr. Vassilas said that "in case a positive case of coronavirus is detected in Achna, then we will ask the Ministry to test all the residents. We call on the people to come today to give a sample "he said and noted that" those who come should wear a mask and keep their distance ".

The accumulated cases that were identified in Ethnikos Achnas, caused the concerns of the residents, who hurried to carry out the sampling control.

In their statements on ANT1's camera, some citizens stated that they consider it their obligation to take the test if they have people in their family who belong to vulnerable groups. Others were there to make sure they were not infected with the virus while most wanted to get tested to protect their loved ones and the rest of the world.

It is recalled that from the sampling of three thousand people in the province of Larnaca, which took place on September 26 in Mackenzie, four cases of coronavirus were detected yesterday.

Following this development, the coronavirus transmission chains in Larnaca are increasing from five to six, bringing the total number of cases to 76.

The new chain of transmission concerns footballers of ASIL Lysis, which has three cases, while the largest chain numbers 25 people, four of whom are from the Diocese of Kiti.

The chain of people associated with the association of Nea Salamina numbers 25 people and yesterday afternoon one of them was served at the General Hospital of Famagusta which operates as a Referral Hospital for patients with Covid-19.

In addition, 9 people are related to a hotel unit on the coastal front Larnaca - Voroklini and five people from restaurant staff on the beach of Finikoudes.

Another 9 people are in the cluster in which the two nurses of the Endoscopy Department of the Larnaca General Hospital are, after yesterday's cases, one person who has no symptoms, came in contact with the husband of one of the two nurses.

It is noted that from yesterday's cases identified in Larnaca, one person had a fever and myalgias on September 26 and underwent the examination through the program.

Also, a person who was found to be positive for the coronavirus, is an employee at the Bank of Cyprus branch in Livadia, who announced that he is temporarily suspending his work, while the other employees have put themselves in self-restraint.

Besides, in the free province of Famagusta, the cluster that concerns the football team of Ethnikos Achnas numbers 27 cases and some of them are related to cases that were found in people related to ASIL Lysis.