OP AMM/STOU: "Hold on tight my son" – The message of the father of the 11-year-old in Liopetri

"You are strong my Marino, hold on tight", the message of the father of the 11-year-old who was involved in a traffic collision in Liopetri with his grandmother and the severe criticism of his child's treatment 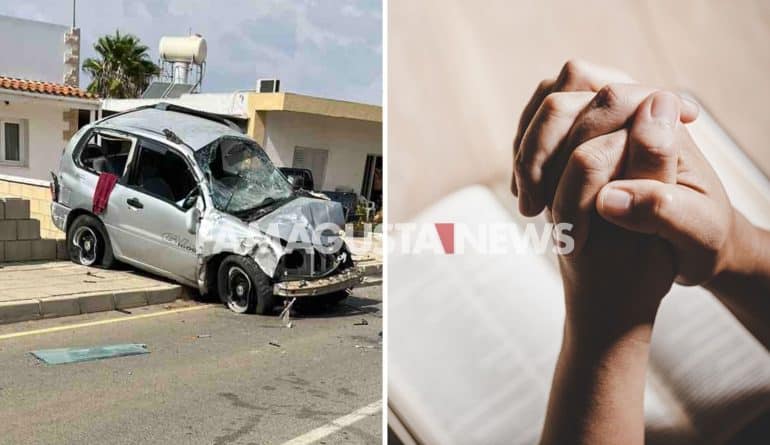 With a heartbreaking message on social media, the father of 11-year-old Marinos, who on October 5 was involved in road traffic collision in Liopetri in a car driven by his grandmother when, under circumstances that are being investigated, he lost control and crashed into a tree, he wishes his son a speedy recovery but also strongly criticizes his child's care.

Read also: LIOPETRI: The condition of the 11-year-old child is critical - He remains intubated

Read his message in full:

"Hold on tight my son. 5/10/22 at 1.05 pm you were taken by ambulance to the Paralimni Hospital after an accident with the car driven by your grandmother. CT showed an epidural hematoma in the brain. You were immediately transferred intubated to the Nicosia General Hospital and at 4.30 pm you underwent a craniectomy, removal of the hematoma and the neurosurgeon Lambrou who operated on you told me that the operation went well. Your health condition was critical. At 8.15 pm you were transferred to the Intensive Care Unit at the Makarios Children's Hospital in Nicosia where the care conditions for children are considered the best in Cyprus. The doctors they watched my child and kept me informed as I emphasized to them from the beginning that I want to know things as they are. They told me that they would have him under sedation and on Friday they would slowly wake him up. Every day they transferred the child to the general room for an axial scan, as Makarios does not have an axial section. This procedure was clearly very dangerous for the child's condition and for all the children in the unit who have to do it.

Read also: LIOPETRI: The 11-year-old is in the Neurosurgery Department with an epidural hematoma on the head

Friday afternoon they informed me that the CT showed a small swelling in the brain, expected after a craniectomy, which they will monitor for this reason they still wanted him under sedation until Monday. Friday afternoon, while I was near my son and talking to him (the doctors urged me to do so) the child's blood pressure gradually rose from 12 to 50. Immediately the alarm went off, the numbers turned red, doctors and nurses ran. They managed to bring the pressure down to normal levels by telling me that this has happened other times and that this is very serious (stroke), while they have informed the doctor who operated on him at the General Hospital that Makarios must come to do a new health assessment my son's The doctor did not come, they spoke on the phone telling them that he would come on Saturday morning. They told me this happens all the time with the emergencies that come to them from the General. They bring them and then they don't care.

Read also: LIOPETRI: Photos from the traffic accident that injured the 11-year-old child

They warned me that during the night, if needed urgently, they would take him back to General for an X-ray.
From that moment I understood that something was wrong and that I had to push things on my own. To exhaust every effort, to plead, to ask for help to save my child. Children have died in hospitals due to medical negligence or a delay in an emergency. My child's condition did not cause a moment's delay. I started the phones talking to people known and unknown. Finally, people who don't even know each other, just listened to my pain, my plea for help, they promised me that I would have news the next morning.

Saturday morning at 7.00 like every morning I call the intensive care unit to ask about Marino. The situation is stable, the pressure dropped, I am told it was quiet at night. Luckily I told them if anything happens let me know. I go to visit my Marino at 12.00 and they tell me that they are preparing him for an X-ray at the General. Why wasn't I notified? What happened; No reply. The doctors who will come will tell you. At 2.00 they returned. I was hanging from the mouth of the doctors. My anxiety is great. The doctor came out and while I was waiting for him to speak to me, he left in a hurry, telling me that he went to school and that the other doctor would inform me.

I started to choke. I was banging on the door shouting for someone to come out and inform me. The unit manager comes out, complaining about my behavior. I demand that you tell me immediately what my child's x-ray showed, I tell him. He started yelling at me that I was delirious and to calm down. If you were me, would you calm down?

He told me that the child's condition is stable and slightly improved. I asked him about the swelling. It's stable, it didn't grow, he replied. Why is his blood pressure rising? Why does he want more anesthesia so he doesn't feel the pain, he answers me. When will you wake him up? When the high pressure readings stop, he answers me. I left troubled and desperate. The phone rang. From the Ministry of Health. My effort paid off. Tonight at 7.00 pm, the top Greek pediatric neurosurgeon Vassilis Zerris, who operates all over Europe, is coming from Athens to see my son. 7.15pm came by taxi from the airport. He immediately went up to the Unit to see the child and I waited for him outside. He came out and tells me: your child's life is in danger. His condition is very critical. He needs urgent surgery. His pressure is constantly rising because there is a large degree of cerebral edema. A piece of bone must be removed from the skull so that the brain can be decompressed from the swelling and the brain pressure can drop to low levels. He explained everything to me in detail. In this situation, it is unthinkable that the child should be taken to the general office every day for an X-ray. He told me that he has instructions from the ministry to do a full assessment of the child's condition and whatever he decides will be done. At the same time, he informs the ministry and requests the immediate transfer of the child to the American Medical Center in Nicosia, which has everything necessary to operate on the child again.

Saturday 10.00pm he is transferred intubated to American at the state's expense. The first concern of Dr. Zerris is to lower the pressure, to perform analyzes and x-rays. He informs me that his blood has thinned enough from the high doses of drugs they gave him in Makarios and that they need to give it time to clot again so that he can be operated on. He pointed out to me that the high doses of the drugs he was given were starting to cause heart problems in the child. The brain failed to instruct the heart to function properly. Also, the axial scan of the vertebra showed that there are 3 fractures in the vertebra, something that was not reported to me at the General or Makarios.

Sunday morning doctor Zerris confessed to me that they took the child from Makarios in a miserable and tragic condition and we would lose him by Monday! At 3.00 pm he entered the operating theater for the second time. At 6.00:XNUMX p.m. the doctor informed me that everything went well. Correct the mistake. Open bone in the skull. The brain was unloaded from the swelling and the pressure dropped. This had to be done in the first surgery. To leave a gap. They should not close it in such cases.

Monday at 10.00am Marinos is in stable condition with stable low cerebral blood pressure. He is given analgesics to be in sedation always controlled dosages (lower dose every day). The doctor told me that the tests show that the kidneys and liver have been affected by the excessive drugs he has taken in the past, but hopefully he will overcome them in time. In a week, he believes, he will slowly wake him up. Then he will be able to tell me if all this delay by the doctors of Genikos and Makarios, their inaction to react in front of the continuous high cerebral pressures that the child presented, giving him only excessive doses of drugs, causing him other organic problems in the already in a critical state of health he was lying to me that his condition was improving when in truth I would lose my child if I left him in their hands.

God, the Virgin Mary who listened to the prayers and supplications of the whole world for my Marino, doctor Vassilis Zerris who is by my child's side until he makes sure that he is out of danger, the general director of the Ministry of Health Mrs. Christina Giannaki who arranged the immediate transportation of the child to American and who herself brought the doctor to save my child, the state and the government who assumed all the expenses of my son's treatment in American, my friends known and unknown who felt the pain, the agony and my despair helping my plea to be heard where it should be. A big warm THANK YOU the most important!

But my reasonable question is this: Why didn't our doctors do the right thing from the beginning? what doctor Zerris did after 5 days? Or the next day or the day after? What did they expect? Did they exhaust everything and conclude that the child would not make it? They did absolutely nothing. They told me nothing but lies that the child was getting better. How many children have died due to medical negligence????

I know my Marino is now in the best hands of doctors and nurses. It's late, but we made it. Now I feel safe about my child's medical treatment. His condition remains critical until he opens his eyes and the doctor tells me that he is out of danger. You are strong my son to make it this far. Stay strong. I'm sure you'll make it! Get well, no matter how long it takes. Only that. Get well!!!!”