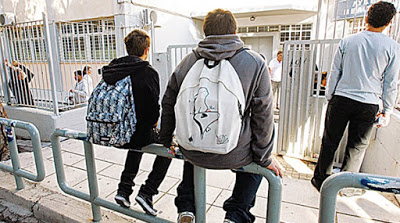 An announcement regarding the latest incidents of violence in schools was issued today by the Pancyprian Student Coordinating Committee (PSEM).

The committee expresses its regret over the latest incidents of violence in schools "School violence is a timeless global social phenomenon, with negative consequences on the level of learning. This phenomenon can only be troubled by certainly trying to eliminate it. "In recent years, school bullying (also known as bullying) has been a part of incidents of violence."

As the Pancyprian Student Coordinating Committee, we express our regret for the latest violence in our schools. School violence is a timeless global social phenomenon, with negative consequences at the level of learning. This phenomenon can only be troubled by certainly trying to eliminate it. In recent years, school bullying (also known as bullying) has been a part of incidents of violence.

Bullying is a social phenomenon and as such must be addressed, with the functioning of the education system directly affecting this phenomenon. Especially in recent years, when the financial crisis affects even more families every day, the phenomenon will increase. From the moment when our classmates do not have the necessities, with unemployed parents experiencing bad conditions in the house, then the phenomenon of violence follows. These phenomena create problems and unfortunately affect the behavior of our classmates, giving birth to perpetrators and victims of violence.

Following the recent incidents that have seen the light of day, we, in turn, want to ring the alarm bell in the state and in the competent bodies for decisive intervention and confrontation of this phenomenon. We all have a role to play in this effort, our parents, our teachers, our classmates and the state, implementing policies so that this phenomenon does not grow further.

As PSEM, we also want to denounce the unacceptable behavior of a portion of the media. Does not the tactic of constantly exaggerating the facts, trying to "judge" and "condemn" our classmates lead to more violence? We will give you the answer. Certainly! The "sensitivity" of the media does not solve the problem but increases it. At the same time, trying to sack all our classmates as part of this unacceptable situation is something we strongly disagree with. We know that there are many of our classmates every day, where they make us really proud of their performance both inside and outside school. There are our classmates where with their struggles, their claims and their maturity, they "put glasses" on many, even older ones.

The phenomenon of school violence is not solved by temporary measures but by substantial changes in the education system. When we try to make our schools human-centered, where they are characterized by respect for human dignity and our rights as children, growing up safe and healthy. Only then can we say that real efforts are being made to change the current situation.