It was decided to expand Cyprus-Greece business cooperation

It was decided during the contacts in Athens KEBE, Business Association and SELK 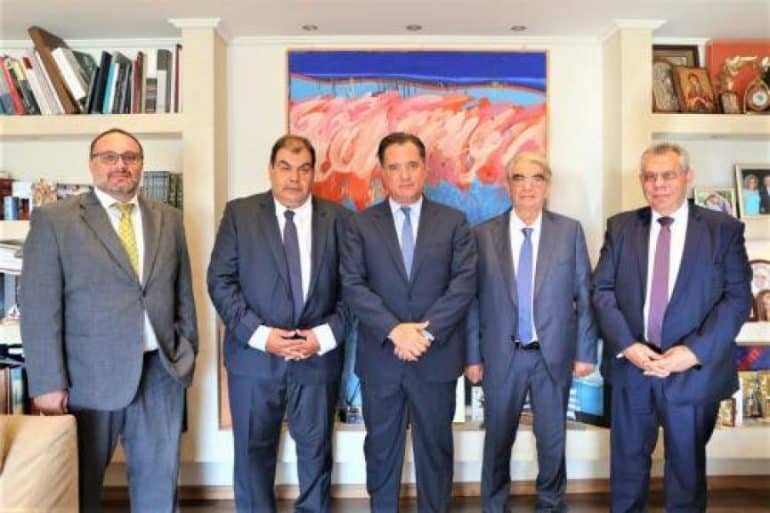 The undertaking of new initiatives to expand the economic and business cooperation between Cyprus and Greece was decided during the contacts held in Athens by the delegation of the KEBE, the Cyprus-Greece Business Association and the Association of Chartered Accountants of Cyprus (SELK).

Specifically, according to a statement by the KEBE, the Secretary General of the KEBE Marios Tsiakkis, the President and the Deputy President of the Cyprus Business Association of Greece Iosif Iosif and Panagiotis Papafilipou, respectively, and the Director General of SELK Kyriakos Iordanos, went to Athens and met with the Minister of Development and Investments Adonis Georgiadis, the Minister of Finance Christos Staikouras, the President and representatives of the administration of the Athens Chamber of Commerce and Industry (EBEA) and the administration of the Central Union of Chambers of Greece.

During the meetings, the economic, commercial and business relations of the two countries were reviewed and the positive will of both sides to undertake new initiatives with the aim of expanding and expanding cooperation in all sectors was expressed.

In this context, according to the announcement, it was agreed to organize a conference in Cyprus, where the Ministers of Development and Investments and Finance of Greece will inform the business world of Cyprus about the new data that exist in the Greek economy, with the aim of facilitating Cypriot businesses. who wish to operate in Greece.

It is also reported that the two Ministers assured the Cypriot mission of supporting the efforts of the Chambers and more broadly of the business world of the two countries to expand cooperation in all sectors.

According to the announcement of the KEBE, in the meetings of the Cypriot delegation with the EBEA and the Central Union of Chambers of Greece, in addition to the stated intention of both sides for regular communication and mutual information on matters concerning the business world, cooperation on European programs of common interest was agreed , the transfer of know-how on start-up matters, the organization of trade fairs in Cyprus and Greece for products of the two countries and the more frequent exchange of visits to promote bilateral cooperation.

In their statement on the results of the contacts in Athens, Mr. Tsiakkis and Mr. Iosif expressed their full satisfaction for the positive response from the government and Chambers of Greece and mentioned that the channel of communication opened by this visit will yield important results for the businesses of both countries.