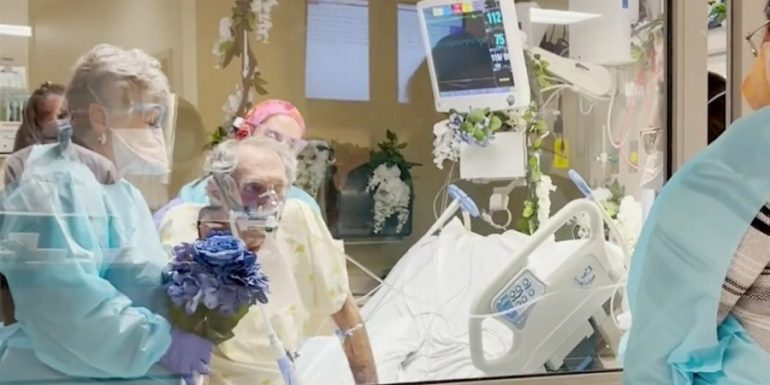 Nothing could stop a Las Vegas couple from formalizing their love again after 50 years apart - neither cancer nor the coronavirus.

The usual sounds in the ICU were broken by sounds of I Do as a patient with COVID and his long-time sweetheart tied the knot.

"We were young and stupid," Patricia said of their first marriage, which took place in the 1970s. "We divorced in one year, but we kept in touch."

If they kept talking to each other, they were mostly living separate lives until five years ago, when they finally reunited after Patricia sent Eddie a message on social media.

"Happy birthday to my beloved ex-husband," she wrote. The statement was enough to get Eddie, who lived in California, to visit Patricia, the hospital said.

After seeing some relatives, Eddie stopped in Las Vegas and invited Patricia to dinner. And their love did not take long to rekindle.

In 2017, Eddie sold his house in California and moved to Las Vegas to live with Patricia. Although they had decided to spend the rest of their lives together, Patricia said that "they never thought of getting married (again)".

That was until Eddie fell ill and ended up in the ICU. After being diagnosed with cancer last October, he contracted from COVID-19 and suffered a bacterial pneumonia infection, according to the hospital.

On January 24, Eddie asked Patricia to marry him. Two days later, they were exchanging wedding vows.

Although they could not see each other because of Eddie's coronavirus, the hospital staff eventually allowed Patricia to enter the ICU for their wedding.

Wearing a protective suit, Patricia was able to enter the hospital ward, which was decorated with flowers, while listening to wedding music.

Just two days later, Eddie died "with his family by his side," the hospital wrote. "We had five wonderful years," Patricia said.