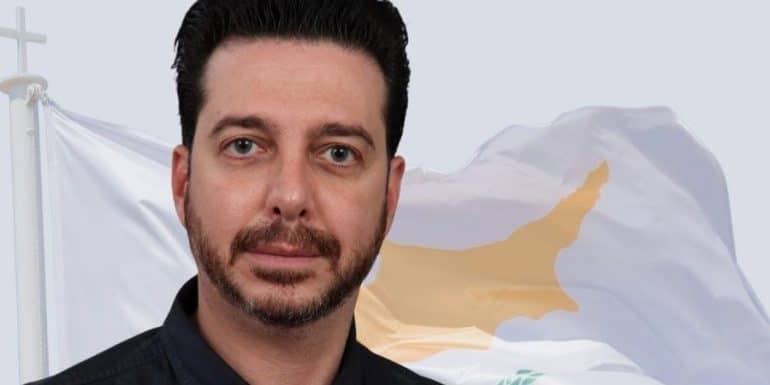 His candidacy is aimed mainly at those who are tired of party worship and personal worship and his pre-election promise is the abolition of all measures for the corona virus and the deletion of all prosecutions and fines imposed, states independent candidate President Alexios in an interview with the Cyprus News Agency Savvidis.

With specific positions on the coronavirus pandemic, the Cyprus issue, energy, the economy and immigration, Mr. Savvidis notes that at personal, social and financial cost, he was the only candidate who resisted "the wretched, divisive and divisive measures of the government and "opposition" for him Covid-19».

"They have been ruling us for 2,5 years with illegal and non-existent decrees, there is a flagrant violation of the constitutional rights and freedoms of the citizens with the aim of the indirect to the extent of direct coercion in a medical procedure", says Mr. Savvidis.

He tells KYPE that his pre-election promise is to abolish once and for all all the illegal measures taken under the pretext of the existence of the coronavirus, as he says.

He promises that all prosecutions and fines imposed on citizens and businesses will be permanently deleted and all sums paid as fines will be refunded.

Mr. Savvidis puts forward as a "plus" in his candidacy the fact that he is the only candidate who fought, as he says, against these non-existent and illegal decrees.

"Our candidacy is addressed to all our Cypriot compatriots who want change, are disgusted with the cult of personality, the cult of partyism and the corrupt establishment, of which most, if not all, of the candidates are a part or are supported by parties that maintain it," he says.

Cypriot - To get on his right footing

As far as the Cyprus issue is concerned, he states to the KYPE that there can be no solution unless the 45 thousand Turkish occupying forces leave.

"The Cypriot issue must be put on its proper footing, as primarily a matter of illegal invasion, occupation and ethnic cleansing of the Greeks of Cyprus by a foreign country against a sovereign and independent state, without any obstruction or veto from any group or community of citizens, and without of course, the existence of anachronistic guarantees which are a direct intervention in the internal and external policy of the state", he states.

Mr. Savvidis says that every citizen of the state must also be a vote and that in a modern state there cannot be irrational and illegal quotas at the expense of the popular will.

He also considers that the return of all refugees and their heirs to their ancestral homes is a non-negotiable goal, because only in this way will the principle of law and respect for human rights prevail.

"The proposed Bi-Zonal Bi-Communal Federation which was expressed through the infamous Annan Plan violates human rights, is governed by racist criteria and is essentially a sell-out of our homeland," he says.

In his interview, Alexios Savvidis presents proposals for the energy crisis, among them the drastic reduction of fuel and electricity tax, the further reduction of fuel taxation for residents of remote rural areas, the immediate use of solar energy and subsidies for photovoltaics systems and the direct utilization of hydrocarbon, oil and other fossil fuel deposits for direct use and internal consumption in the first stage and then their channeling/export. In his suggestions, the heating allowance for those who live at an altitude of more than 600 meters and the subsidy for the thermal insulation of houses for residents of mountainous areas.

For the issues of corruption, Mr. Savvidis recommends the abolition of parliamentary and presidential immunity and the reactivation of Article 144 of the Constitution for the re-establishment of the Supreme Constitutional Court for fast adjudication of cases challenging the constitutionality of laws. His proposals also include the removal of the consent required by the legal service to register a criminal case in relation to specific criminal offences, the establishment of horizontal voting in all elections where it is applied and the introduction of personal civil liability for those who manage public money or practice authority for their criminal errors or omissions.

He also recommends the introduction of the recall principle, so that citizens can control the President of the Republic and be able to terminate his term if he proves to be unreliable or has deceived them. "With this legislative regulation, the pre-election program of candidates for state officials becomes a real social contract, the violation of which can lead the offending official to lose his position", says Mr. Savvidis.

It also recommends the participation of citizens in decision-making by introducing the institution of referendums and the enactment of Laws, the establishment of an Anti-Corruption Council, the abolition of postings in the public sector and the creation of regular jobs, speeding up the adjudication of all court cases with further recruitment of judges , introduction of out-of-court settlement mechanisms, etc., further establishment and respect for the separation of powers in such a way that the organs of the executive power do not obstruct the smooth operation of the Judiciary, and modernization and strengthening of the effectiveness of the execution of judicial decisions in a fair manner, with based on the protection of vulnerable groups.

Mr. Savvidis also has a number of proposals for immigration, starting with the tightening of the immigration/refugee framework so that all asylum applications from countries considered safe are rejected immediately and legislative enactment and establishment of a percentage of asylum seekers in relation to the percentage of the adult population of the Greeks of Cyprus of the order of 1%.

"Only the applications that fill the percentage of 1% and above will be examined while the rest will be rejected", suggests Mr. Savvidis who also advocates the need for bilateral and multilateral agreements with countries where the asylum seekers in question come from for immediate and faster deportation.

He also believes that specific criteria should be established in relation to the percentage of male and female asylum seekers as well as immigrants, noting that "it is not possible for the vast majority of existing asylum seekers to be adult men of fighting age".

There must also be, he says, increased security in city centers and frequent checks to combat illegal immigration and crime which has increased, he says, due to the uncontrolled flow of foreigners into the free zones.

"Our proposals include protection and solidarity only for real refugees, provided that such a thing is within the state's capabilities at any given time, and as long as serious survival problems of the vulnerable social strata of the Greek Cypriots have been resolved," he says.

It also recommends stepping up the guarding and surveillance of our sea and land borders as well as the Green Line, adding that a maximum of 1% of asylum seekers will have to work a few hours a week to qualify for allowance and receive vouchers instead of cash.