Senekis: Citizens are threatened for their presence at Christodoulidis gatherings (VIDEO)

DISY MP Efthymios Diplaros and DIKO MP Christos Senekis were invited to speak about the Presidential elections and the campaign of their candidates. 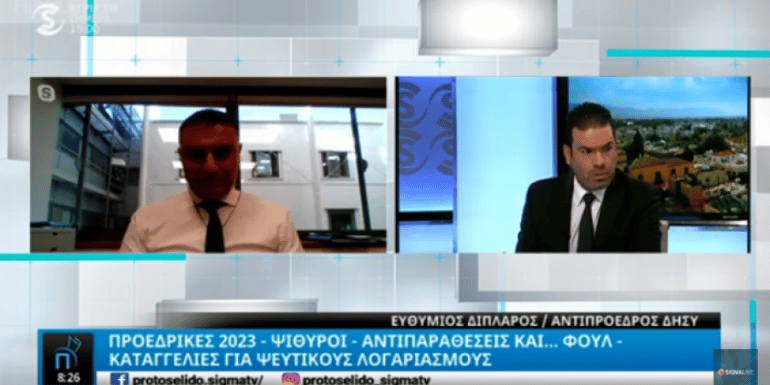 DISY MP Efthymios Diplaros and DIKO MP Christos Senekis were invited to speak on the Front Page about the Presidential elections and the campaign of their candidates.

Mr. Diplaros initially stated that they expected that the debates planned at RIK would take place with the participation of all the candidates. "We will see the first debate on October 5 and civil society will judge the positions and program of each candidate." He added that Averof Neofytou is in daily contact with civil society and organized groups. "If there is one thing that Mr. Neofytou is famous for, it is that he is not just a recorder of problems, but the person who gives solutions to problems."

When asked if the Democratic Alert overcame the panic of Nikos Christodoulidis's announcement, he replied that "among the grandiose gatherings that take place by province and also with the sea of ​​people we had in Limassol with over 5000 people, there is no panic but on the contrary there is an unprecedented conspiracy with moral flourishing".

For his part, Mr. Senekkis stated that they are justified in choosing to support Nikos Christodoulidis. "With the contact he has with the world, with the gatherings we hold, he confirms every day everything that the citizens found about his morals and the quality of his character and about his ability to compose and build bridges without exclusions and prejudices."

Responding to the reports about the use of fake accounts in the NQD, he said that "anyone who deals with the internet knows who has fake accounts. The answer to the unprecedented mudslinging is the recent grand gathering of Nikos Christodoulidis in Limassol".

It also stated that as DIKO they will not respond to issues that have criminal ramifications by making public a private conversation through messages. "Citizens rank them among the meaningless and unimportant issues of the election campaign."

He complained that every day citizens call and inform that they are being threatened and blackmailed for their public presence at Nikos Christodoulides' gatherings.

Watch the whole discussion in the video