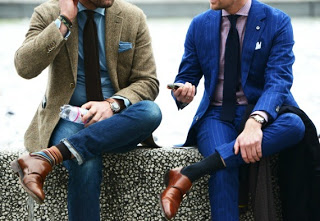 Cleanliness may be half the battle, but dressing can be the other half.

Men's clothing may not be as complex as women's clothing, but it also obeys some rules so that each of your looks is considered unique. We have seen the following mistakes often and more or less we know what we must do to avoid them.

Read about the stylistic mistakes you must avoid for your own good:

The tearing in the leg Another is the washed jeans with the pre-planned tears on the knees and a little above, and another is that the leg has become a hole from the use. When you get to the point where the other person can see the top of your sock while you are walking, it means that it is time to change jeans. You're not in Woodstock and no, that's not an opinion.

Do not wear sportswear with a suit Combining a casual and flat shoe with a more casual suit is not forbidden, nor does it have to be Calvin Klein.

Do not prefer loose shirts Some people tend to think that they give more air to the look and are much more stylish in the summer. The truth is that there is nothing worse than a garment that "hangs" on you and makes you look baggy.

Do not wear sunglasses at night Steve McQueen did not do it in his youth either and she was also a great diva. There is no reason to pretend to be unlucky at night playing the male Lady Gaga. Can't you hear the laughter around you?

Do not wear a wide jacket Only if you are Chandler from the Friends. And let's not listen to excuses, since you can take it to a tailor shop to shorten the sleeves.

Do not button the top button on the jacket If the suit was white, you would appear to be locked up in a psychiatric hospital. The jacket should not "gather" on you and should give you freedom of movement. The fabric, when crumpled, can easily be damaged, especially around the buttons. There is no longer any excuse to combine it with anything. Basically there is no reason to wear it. Only if you work as a waiter, or on a beach with sunbeds. If you were Eminem or 50Cent we could tell. From the moment you choose a shirt and good pants, all you have to do is pass the "rest" to the next loop. So simple, so classy.