The most popular destination for yachts owned by oligarchs is Turkey 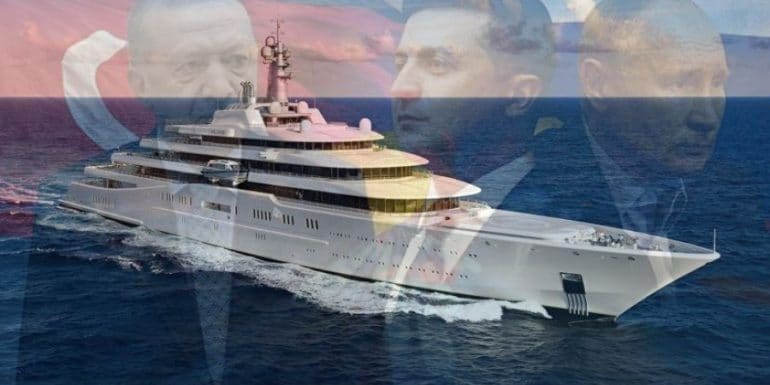 As Western sanctions began to fall on Russian oligarchs after Vladimir Putin's invasion of Ukraine, many withdrew their yachts from the European Union and British territory to avoid the risk of seizure.

Some went to Dubai, while others fled to the Maldives. Now, the most popular destination for yachts owned by oligarchs is Turkey.

At least eight yachts belonging to Russian oligarchs - including Roman Abramovich's $ 438 million, 533-foot Eclipse and $ 474 million, 458-foot Solaris - are currently moored in Turkish ports or have recently departed. Ships now in Turkey are worth a total of $ 1,1 billion, according to yacht valuation experts VesselsValue.

The country is popular with oligarchs for reasons beyond its sunny climate and vast Mediterranean coastline: despite being a NATO member, Turkey has rejected Western sanctions and maintains close ties with Russia, even hosting peace talks. between Russia and Ukraine in Istanbul in late March.

"Sanctions imposed by European countries and the United States have prompted billionaires to look for alternative investment markets," said Zeynep Fıratoğlu, communications manager at Space, an Istanbul-based luxury real estate company. "Turkey stood out as a viable option with its geographical location, advanced markets and banking system, as well as its neutral stance between Russia and Ukraine."

Turkey's main link to Russians is the granting of citizenship through an investment program, which provides a Turkish passport within three to four months to anyone who invests at least $ 250.000 in real estate or $ 500.000 in government bonds, companies, investment funds or a local bank account. . This is the change of pocket for the Russian oligarchs, they make Turkey an attractive alternative for those who are looking for a second passport. And while many other countries in Europe also have programs with so-called "golden passports" that offer similar benefits, these roads may soon be closed.

Cyprus, a long-popular tax haven for Russians, has targeted oligarchs: Forbes has found that 15 Russian billionaires also have Cypriot citizenship, but the island nation has already revoked the passports of eight oligarchs, including its oligarch.

According to iferif Nadi Varlı, chief real estate agent of Vartur Real Estate based in Istanbul, Russian billionaires are in the market less for luxury housing and more for large investments that could bring them a profit - as well as a Turkish passport. "Their yachts are here, they spend time here," he says.

Nadi Varlı was recently contacted by a customer representing a Russian buyer who wanted to spend $ 100 million on a hotel on the Mediterranean coast of Turkey. "The hotels we offer are seaside, from Antalya to Bodrum," he says. "All Russian clients are now trying to obtain Turkish citizenship through investment."

Coastal cities such as Bodrum, Fethiye and Marmaris are the most likely destinations for Russian oligarchs seeking to invest in Turkish real estate. Four of the eight Forbes-owned oligarchs' yachts in Turkey are moored in the area: Abramovich's Eclipse and Alexander Nesis. The $ 110 million Romea is moored in the town of Göcek near Fethiye. Andrei Molchanov's $ 110 million Aurora is located in Marmaris. and Abramovich Solaris is in Yalıkavak, near Bodrum. Oleg Deripaska's $ 58 million Clio left Göcek on April 16, while Iskander Makhmudov's $ 55 million Predator left the port of Kusadasi a month earlier. Elsewhere in Turkey, Vagit Alekperov's $ 8 million Space is in Tuzla's marina in Istanbul, while Arkady Rotenberg's $ 38 million's Rahil was last seen in Tuzla before leaving on April 27 for the Russian resort of Sochi.

Abramovic, the highest-profile yacht oligarch in Turkey, was spotted at peace talks in Istanbul on March 29th. He has a long history in the country: Varli told Forbes that his company sold four apartments in Bodrum to members of the Abramovich family in 2007, but it is unclear whether they still own them. One of his jets — a Gulfstream G650 registered in Luxembourg with queue number LX-RAY — flew from Israel to Istanbul on March 14 and left for Moscow the next day.

In addition to real estate investments, the Russians have opened companies in Turkey. The Russians set a record 64 companies in Turkey in March, nearly quadrupling in February — and that number is expected to rise as soon as the April figures are released, according to Eray Sayin, an associate at Istanbul-based Sayin Law & Consulting. . It takes five days to set up a company and the process only costs about $ 3.400.

"After the sanctions were imposed on Russia, there was an explosion in the number of companies set up by [Russian] citizens in Turkey," says Sayin. His company has received 25 requests from Russian customers seeking to open a company in Turkey in the last 25 days.

Most of these companies are set up to invest in real estate, but some are also interested in the energy industry, especially renewables and oil and gas. It is possible that at least some Russian oligarchs and billionaires will open companies in Turkey, according to Sayin, but it is not clear how many. If war-related Western sanctions on Ukraine continue for months, it expects Russian companies in other industries - including fertilizers, one of Russia's main exports - to build factories and invest hundreds of millions of dollars in Turkey.

"There are a lot of investors in the energy industry, but at this stage they only make small investments because everything is uncertain," says Sayin, adding, "But it will increase."

However, Turkish banks are wary of violating the sanctions and require documents proving that the Russian person or company opening a bank account has not been punished. And the high demand for citizenship for investment can also increase the cost of the program: the Turkish government plans to increase the minimum investment in real estate to $ 400.000 from $ 250.000.

Turkey and Russia have deep economic ties that transcend oligarchic ties. Turkey is Russia's fifth largest export market and Russia is Turkey's tenth largest market. Vladimir Putin and Turkish President Recep Tayyip Erdogan have also come closer in recent years, following a period of strained relations when the two powers backed opposing sides in the Syrian civil war. Tensions escalated after Turkey shot down a Russian fighter jet at its airspace in November 2015, leading to trade restrictions and visa-free travel. But the two countries normalized relations in 2016, and Putin and Erdogan kept in touch throughout the war in Ukraine: the last phone call between the two leaders was on April 26.

As long as Western sanctions are in place and Turkey refuses to impose any of its own, Russian oligarchs are expected to continue investing in the country. This will be easier to do with a Turkish passport in hand and a locally registered company.

"In the short term, we expect Russians to obtain Turkish citizenship by buying a property in Turkey in order to have an alternative to their existing Russian passport," Fıratoğlu said. "In the medium to long term, we can expect Russian billionaires to move their businesses and wealth to Istanbul and have their families live either in Turkey or in other European countries."