"Both of them are part of the problems," said General AKEL 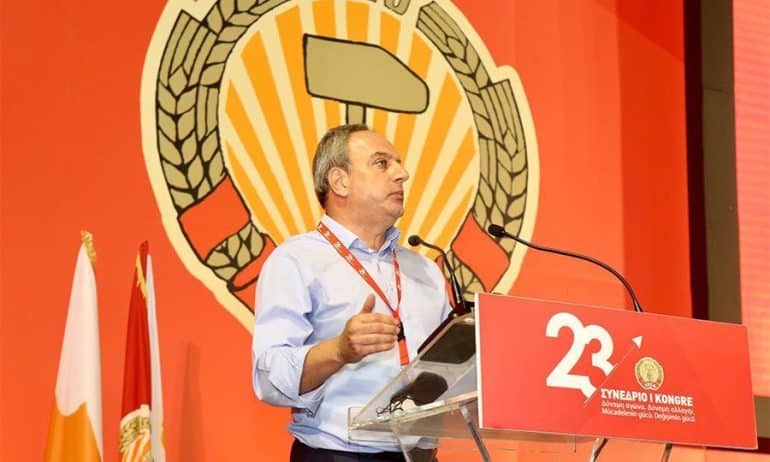 Averof Neofytou and Nikos Christodoulidis cannot bring about the change, since both of them are part of the problems, they are the protagonists of this situation which our people demand to be relieved of by achieving progressive change, said the General Secretary of AKEL, Stefanos Stefanou, in his speech at the 28th Provincial Conference of AKEL Famagusta at the Agia Napa Town Hall.

In his speech, Mr. Stefanou stated that "the Pan-Cypriot Congress of AKEL last July set the goal and task of making the party stronger. To strengthen his role and his intervention in favor of our country, our people, workers, young people, society".

Mr. Stefanou said that there are two pillars that will determine success in the implementation of the goal set. The first pillar he noted is "to modernize and renew the Party. To evaluate, review and adapt its structures and procedures to modern conditions and to the way society thinks, reacts and mobilizes".

"To reconstruct it organizationally. To give it new momentum, vitality and strength. To create new dynamics that will make his presence more effective and more intense in the political and social affairs of our country. To make more intense and effective the intervention of our Party in all aspects of life", he added.

The second pillar, he said, "is to open our Party even more to society. To further strengthen his relations with the masses". He added that the presidential elections "are being held at a very critical turning point for our country. Their result will determine where our country and our society will go."

He added that "our country cannot continue to slide towards the consolidation of the division by passively watching this development. And in fact it should be considered by the international factor that the Greek Cypriot side is jointly responsible for the impasse when we have such a provocative and negative Turkey in front of us".

He added that "this shows the failure of the management of the Cypriot by Anastasiades, to whom the DISY of Averof Neophytos offers continuous and uninterrupted support and coverage".

He said that "Cyprus and our people deserve better luck. Our young men and women deserve a better perspective. They cannot continue to live on half wages, with unaffordable housing and an uncertain future."

He concluded by stating that "only in the person of Andreas Mavroyiannis can our country once again confidently move towards the future. It can achieve progressive change by activating all the strengths of our country, all the possibilities and all the talents of our people.