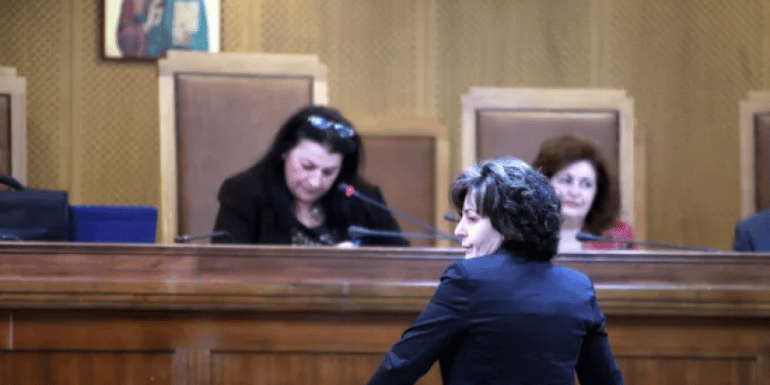 Unexpectedly, the trial in the second instance for Golden Dawn is proceeding with the first testimony today.

The president of the Five-member Court of Criminal Appeals, Sofia Panoutsakopoulou, is expected to call Magda Fyssa to the stand, two years after the verdict of the first instance court which, as of today, October 7, 2020, found Golden Dawn to be a criminal organization. It was the moment when the mother of the 34-year-old musician, with raised hands, clenched fists and looking towards the sky, had left the room shouting loudly: "Paul, you've made it my son!" in one of the most powerful moments of the historic day.

The mother of Pavlos Fyssa will be the one who will open the cycle of witness statements in the trial that will re-judge the case of the Golden Dawn action.

In today's fifth session of the court, the mother of Pavlos Fyssa has been called to testify about everything and especially about what happened on the night of September 18, 2013, when her son succumbed to the stabbings of the Golden Dawn executive Giorgos Roupakias, who was sentenced to life in prison. .

The witness who is expected to take the stand today has stated from the beginning that her child was killed by a criminal organization and not by individual people in random circumstances and circumstances. "There is a criminal organization called Golden Dawn and they are in Parliament. These people came to our house and killed our child. Can everyone understand that?' he had said in the first court, in October 2015, when he was on the witness stand and while Golden Dawn had a presence with 18 seats in the Parliament. Then in her testimony the woman, who was almost never absent from the court in the first trial, had Giorgos Roupakias behind her while she was on the stand, the man who managed to stab her son twice in the heart.

Today it is doubtful whether the perpetrator of the murder will choose to be in court as in previous sessions of the Five-Judge Criminal Appeal Court he did not request to be present at the trial.

Mrs. Fyssa will speak today about the case that changed her life starting from the fateful night when she saw her child dead in the General State Court of Nice

"We arrive at the State. I see a lot of people outside, relatives, friends. I run inside and see two doctors in front of me. The doctor was crying. She was crying but she wasn't telling me, I started pulling the screen to see what was happening. The doctor gave me a pill and told me the truth. "Paul is gone." And I said "How is that possible?" He told me he was stabbed in the heart, the Golden Dawn. And he says to me: "Wait, they've caught him." And that the stabbings were professional and that even if the bad happened out here, the doctors wouldn't catch it.

At five thirty in the afternoon we were talking and at three in the morning I found my child with two knives in the morgue. But my child was not scared, for those who think that they scared him I say, to know that my child just fell asleep. He was an angel. I was trying to warm him up," she had said in her testimony at the first trial.

At the previous meeting of the Five-Member Court of Criminal Appeals, the president invited Ms. Fyssa after noon to start testifying, however this was not possible as the microphones in the room were not working, a fact which was protested by lawyers of both sides and journalists.