Greece: The moment the masked man opens fire in a cafe - The video document is shocking 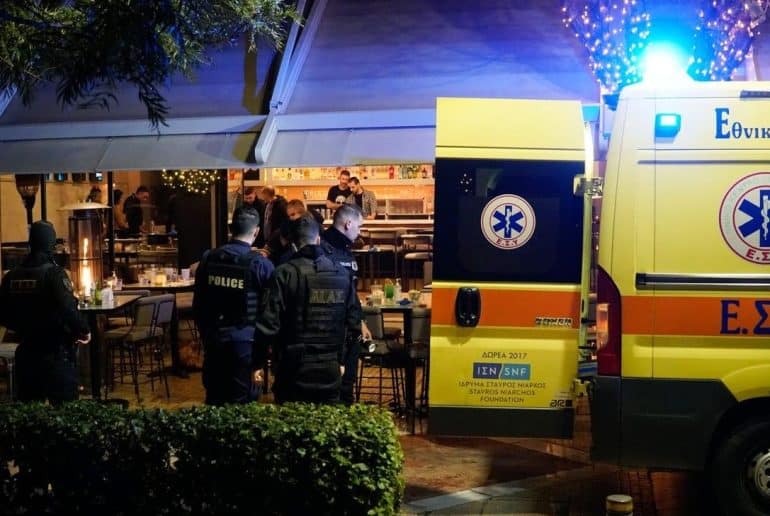 According to ELAS, settlement of accounts is the cause of the murder that occurred on Sunday night (18/12) in Nea Smyrni with two men falling dead from the fire of a masked executioner who did not hesitate to open fire in a cafe in the square of the area while inside it were unsuspecting citizens.

In fact, a 31-year-old woman was also wounded by the shots of the still-uncaught assailant, who was taken, fortunately without her life being threatened, to the "Red Cross" hospital, where she is being treated.

The image that the police have formed is that the hooded executioner, before opening fire at the table outside the cafeteria, where the 41-year-old and the 44-year-old who were murdered were sitting, had walked in the square of Nea Smyrni "scanning" the area.

The police officers who were in the area from the first moment have collected footage from security cameras to "map" the executioner's movements, both on how he arrived at Nea Smyrni square and on how he left it.

New Smyrna before. In the world. We are doing very very well #Nea Smyrni pic.twitter.com/NOWRMfC1wD

Video footage of the moment the gunman executed the two Albanians in cold blood shows the man who spread death and terror in New Smyrna firing seven times at the table where the 41-year-old and 44-year-old were sitting.

According to information, one of the two victims of the shootings in Nea Smyrni was a well-known thug who operated in the area and had the role of "collector" in a ring that sells protection to the shops of the square.

Police sources speak of a person who did not command the night but functioned as a "front man" of the godfathers of the night who infest the nightclubs of New Smyrna.

The tall Albanian was a well-known person in the square because he lived in Nea Smyrni, while people who know people and situations in the area talk about a long-planned execution.

Lately, the victim has been frequently changing vehicles, sometimes driving fast cars and sometimes large engines. However, he was allegedly not guarded despite having several, open foreheads and as a result he was found dead by the bullets of the masked executioner.