Economou: Athens is "open" to the possibility of a meeting between Mitsotakis and Erdogan

If there is an intention to meet on the Turkish side, it will be evaluated and Athens will respond positively, said the government representative 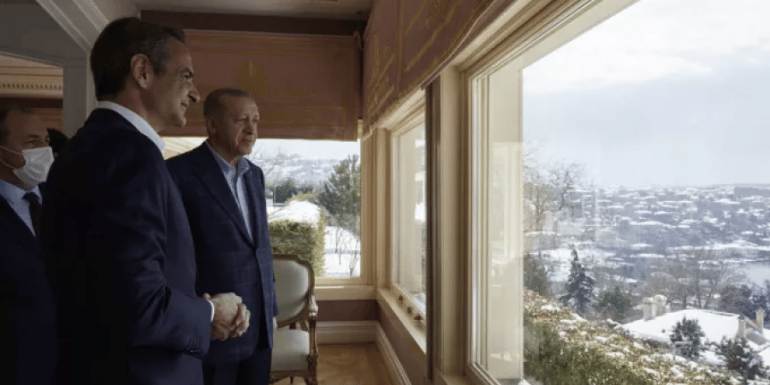 Athens declares its openness to a possible meeting between Prime Minister Kyriakos Mitsotakis and the President of Turkey, Recep Tayyip Erdogan, in Prague, if there is a relevant intention from the Turkish side, as the government representative Yannis Oikonomou said during the briefing of the political editors. The briefing began with the actions of the government in the field of the Economy, but also those concerning society, such as the liquidation of outstanding pensions, as well as the digital KEPA. At the same time, he informed about the meeting of the Prime Minister with the Vice-President of the EU Mrs. Jourova.

The recommendation of the government representative
"We live in a time of heightened problems caused by the pandemic and the Russian invasion of Ukraine. The crises are imported but their consequences concern both our country and the citizens", stated the government representative, Yannis Oikonomou, starting the briefing for the political editors. "In the face of problems, quick and well thought-out decisions are required. A strong political will and a mechanism for the rapid implementation of these decisions are needed in order to gradually reduce the intensity of the problems faced by Greek men and women in their daily lives", he stressed.

"Society requires practical solutions. Society requires political pragmatism. No theories, no aerologies, no creation of new political and social impasses," he said. He blamed the opposition for "preferring to raise dust and noise", accusing it of being caught up in small-party calculations and essentially detached from the concerns of citizens as well as indifferent to international reality.

As he said typical was the example of the previous week during which the government produced tangible and visible work while the opposition was spent in an anti-government rhetoric without a counterpoint.

He attempted, as he said, a short and comprehensive account to show with evidence how, on the one hand, the government uses the time to provide answers to the citizens' problems while the opposition wastes it uselessly for both society and the country.

He mentioned starting with the new major investment by Google which, as he said, transforms our country into a digital portal and is estimated to multiply 2,2 billion euros and 20.000 indirect jobs by 2030 to the wider economy.

He also said that Greece completed 28 reform investment milestones of the Recovery Fund earlier than expected and may disburse the second and part of the third tranche of the Resilience and Recovery Fund of €3,6 billion by the end of 2022 before the rest of the countries. .

Thirdly - as he said - despite the international economic uncertainty, the economic climate improved in August and September in our country, while it declined in the rest of Europe. September did not close with an increase of almost 50% in tourism increases and revenues compared to September 2019.

Issues concerning society
Moving on to issues concerning society, Mr. Economou referred to the operation of the new digital KEPAs, to the fact that 97% of the outstanding pensions have already been awarded, to the institutionalization for the first time of the provision of prophylactic antiretroviral treatment by state law on the HIV virus and the posting for public consultation of the new air rescue mechanism for the primary transport of injured and sick people to health facilities.

For security and defense, he emphasized that thanks to the well-planned government policy, another layer of lawlessness was uprooted from the student residences of the NTUA Campus. The missile boat named after the hero of Imia, Vice-Admiral Panagiotis Vlahakos, also joined the arsenal of our Navy.

In the part of the energy crisis, he mentioned that the Commission adopted as a common European regulation the Greek mechanism for recovering excess revenues from the energy companies. DEPA Trade concluded a very important agreement with the French Total that ensures energy sufficiency of natural gas in our country until March 2023. The IGB natural gas pipeline was also put into commercial operation, diversifying the supply sources of the wider region leading to gradual de-addiction from Russian natural gas.

As he characteristically said, "from all this it follows that our government, in contrast to the opposition, is a constant factor and part of the solution to the problems faced by Greek men and women. We deal with the problems quickly and decisively with an absolute awareness of the seriousness but also of the degree of difficulty they have put in the lives of our people".

Then Mr. Economou referred to the visit of the vice-president of the European Commission for Values ​​and Transparency, Ms. Yourova, which ended last Friday. He expressed the government's satisfaction with the level of cooperation between our country and the Commission regarding the issues of European values ​​and transparency. He mentioned, among other things, that in the meeting she had at the Maximos Palace with the prime minister, the vice president was informed about the moves that have been made to establish additional checks on the operation of the security services. Also, the prime minister welcomed the new framework, the Media Freedom Act and pointed out that many of the provisions of the new framework are either already part of the Greek legislation or have been included in the plan to strengthen publicity and transparency in the printed and electronic press .

He also referred to Ms. Jourova's meeting with the Media Task Force.