USA: Toddler left alone in life - Both his parents were killed in the massacre

Orphaned a 2-year-old boy – Found under his father's corpse 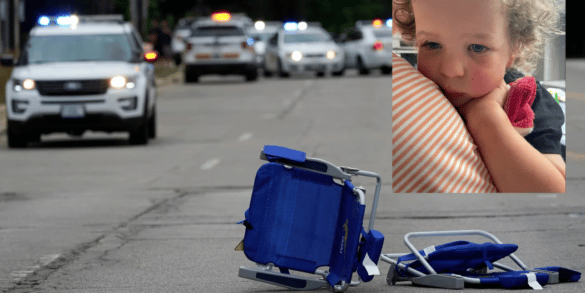 The parents of a two-year-old boy who was found wandering alone after a deadly attack on a crowd participating in or watching the Fourth of July parade in Highland Park, a suburb of Chicago, Illinois, are among the dead. of recent gun massacre against an American community.

Irina McCarthy, 35, and Kevin McCarthy, 37, were killed by gunfire from a young man who fired a rifle into the crowd from a rooftop, turning the US Independence Day into a national tragedy.

The baby boy, Aiden, was separated from his parents in the chaos caused by the attack and was later handed over by police to family members, according to a fundraising website.

"We have a long way to go to heal the wounds," said Irina Colon, who set up a GoFundMe page for the boy with the family's consent, adding that his grandparents will take over Aiden's care.

Among the dead in this attack is a Mexican, 78-year-old Nicholas Toledo, who had gone to Chicago from Mexico to visit his family. Some of its members were injured in the attack but are expected to survive, according to local media.

Another identified victim of the attack was 63-year-old Jackie Sandheim, who was a rabbi at a Highland Park synagogue. Jackie leaves behind a husband and daughter.

Among the other dead identified by authorities are 64-year-old Katherine Goldstein and 88-year-old Steven Strauss. So far, no further information has been released about them.

The attack also injured about 50 people, according to police and hospital officials. Among them is a 69-year-old man who is in critical condition from a gunshot wound.

Thirty-nine people, ranging in age from 14 to about 70, were also treated at NorthShore University HealthSystem hospitals, according to spokesman Jim Anthony. Nine are still hospitalized.

Among the injured were kindergarten teacher Zoe Kolpack and her husband, who were sitting down to watch the parade with their two young children, who escaped the attack, again according to a fundraising page.

Kolpak's father and brother-in-law were also shot, according to a statement from the organizer of the fundraising page, Samantha Whitehead, a friend of Zoe's.

"They are all in the hospital undergoing various surgeries," Whitehead added.