Dki-Mati: "We lost friends, neighbors and I haven't heard from anyone "I'm sorry" 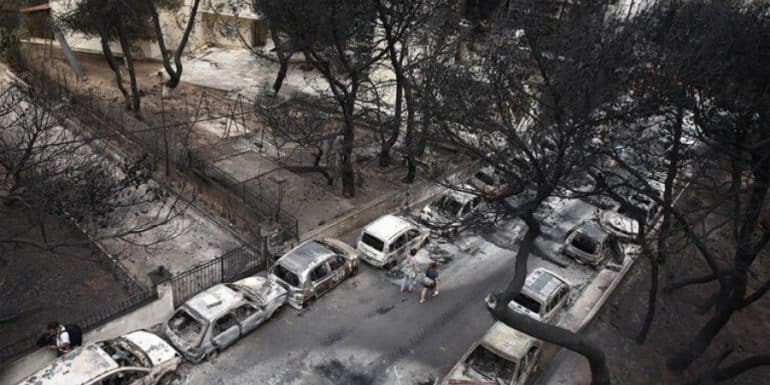 “I was condemned to have regrets for abandoning my mother and to carry it with me for the rest of my life. We lost friends, neighbors and unfortunately I haven't heard from anyone "I'm sorry". They did everything very well. If they weren't well dressed what would happen? Now we have 104 dead and 54 seriously injured" testified at the trial for Mati a woman who was forced, having caught fire herself, to leave her mother behind.

Angeliki Konstantaki, who lost her mother in the fire and was injured herself, described to the court the hours of agony and unbearable pain she experienced when "it started to rain scalds on Mati". The witness, who as she said her house was "20 meters from the beach road", decided with her husband and mother to flee towards the sea when they saw a lot of smoke circling the area: "At five to ten a friend took me from He shouts and tells me to leave the house because there is a fire in Dau and I am afraid. My house is 20 meters from the beach road. My husband went up to the roof, he didn't see anything alarming. At some point around 18.00 we heard that there is a fire in Kallitechnoupoli. Mr. Burnous (mayor at the time, who is a defendant in the trial) made statements that the Eye is not in danger. The smoke becomes very intense. The power went out and we went to leave at 18.20. I put the children and my mother in the car to go to the sea."

As the woman testified, after telling her children to leave, she took her mother and they started going down "while it was starting to rain hard. I led my mother towards the steps and just before she tripped and fell. My husband realized there was a problem. He turns to help me get my mother. At that time a big fire caught us, I caught fire too, I was burning and there was no one around. My husband could not move her. When my husband saw that we could not save my mother he grabbed me to save me. He dropped me off at a small beach. There were a lot of people there. They put me in the sea. I sat for a while and because I had unbearable pain from the burn I got out... I stayed six hours in the sea... I knew that I had my mother on top of me and I couldn't do anything. I heard explosions, people shouting names looking for theirs... At 12.30:XNUMX at night, some people with flashlights came to take us to get us out of there... They put me in a chair and threw me in an inflatable boat and took me to Rafina. I walked to the harbor from where they left us. I had no one. My sons reached Nea Makri by walking and swimming. They were treated by one of their professors..." he said.

The witness said that "I met friends I knew, burned, in pain, who were all trying to find out what happened. No one had realized what had happened and why it had happened. They started bringing in body bags. I didn't know if my mom was inside... When the doctor saw me, he sent me to "Gennimata". I stayed 17 days. I experienced very difficult things."

Aris Grekiotis testified about the loss of his partner Stella Christofidou for which both her daughters testified. The woman was lost trying to reach the sea. She had been found charred on the Frankou plot and had been identified five days after the tragedy.

Mr. Grekiotis testified that he was with his partner at their home in Kokkino Limanaki and that while they initially went up to the mountain with his motorcycle, they then returned to Mati. However, the fire was also descending towards Mati, which in the meantime had changed its direction due to the wind "the smoke was increasing and had changed direction". So they decided to leave "Stella got into the car while I was going to leave with the motorbike... We had made an appointment at Kokkino Limanaki. I went to Red Harbor and waited for Stella. I call her at two minutes past seven in the afternoon. He replied that he left the car. That has a great fire. I was picking her up, she was calling but she didn't answer. I made 3-4 calls. I thought he would run and he couldn't answer. While I was in Kokkino Limanaki I saw 2-3 trees bursting into flames. The cars were blocked."

The witness said that he started from the beach on foot to find his partner. On the way he saw blocked cars "I went crazy because even if a policeman had been there at that time not letting the cars enter towards Mati, all the cars would have gone and people wouldn't have been burned. I walked the dusty beach to reach from the rocks or swam to find the spot where Stella went down. Climbing the rocks of wind, lava and fire, I arrived. I hid in the caves so that the fire wouldn't burn me. I arrive at the Blue Harbor. I hear a horn and it was an inflatable one. They tell me to come and rescue me. I got on the inflatable and we continued towards the Blue Coast".

As Mr. Grekiotis said, they started making routes to Rafina and back with the inflatable to rescue people. In one of them they also took the body of Evita Fitrou "the coastguard who was on the inflatable received a call to go to a beach because there was a person who had died. It was the little girl who had fallen off the rocks. We went there, I couldn't bear to go out. We received the baby girl. We put it on the inflatable. We went to Rafina. I was asking if anyone had seen Stella. 2 to 2,5 hours had passed.

Mr. Grekiotis managed to find out about his partner five days later. "I searched for many days with Stella's daughters and sister. There was no help from anywhere. People were not notified. There was time to update. Everyone did what they could."

Stella Christofidou's daughters described the frantic effort to locate their mother. "I had heard that several people had been found on a plot of land. I went there. I saw things thrown by people, I caught a burnt key, I put it down. I didn't see anything of my mother apparently. I gave a DNA sample. I went to Mati every day, I called "mom" everywhere. They informed us five days later that my mother had been identified at the Fragou estate," said one of the victim's daughters, Athina Nikolaou.

In his testimony, Antonis Kakaris, who lost his brother Spyros, who was trapped inside the Eye, said that the body of Spyros Kakaris was identified five days later: "We were looking for him, we made posts, through friends, acquaintances. He was a paratrooper, strong, I thought it impossible for him to get hurt. We searched for five days when he was missing, until he was identified. We learned that he was headed towards the sea, as a result of which he fell into a traffic jam. Unfortunately, with all that happened, he lost his life, in Poseidon. He was trapped, walked towards the sea and did not manage to escape".